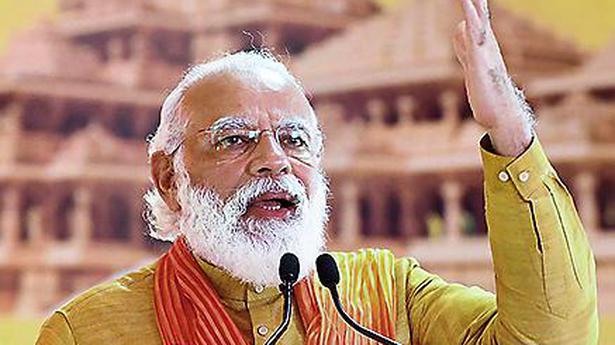 Mr. Modi enters his 20th year as head of an elected government

As he entered his 20th year as head of an elected government, Prime Minister Narendra Modi on Wednesday said he wants to assure the countrymen once again that the welfare of the nation and the poor is paramount for him.

Also read: One year of Narendra Modi 2.0 | We will decide our present and future, PM tells nation

In a series of tweets in Hindi, Mr. Modi said he will continue to strive to make himself worthy of people’s blessings and love, as he conveyed his gratitude to them.

“I would like to assure the countrymen once again that the welfare of the nation and the poor is paramount for me and will always be so,” Mr. Modi said.

“No person can ever claim that he does not have any shortcomings. A long period of holding such important and responsible positions…being human, even I can make mistakes,” Mr. Modi said.

He said it is his good fortune that despite all these limitations, people’s love for him is growing.

Modi said the way people have showered blessings and love on him from every corner of the country today, the power of his words to thank them is falling short.

“Your blessings and love will strengthen our resolve of service to the country, welfare of the poor and taking India to new heights,” the Prime Minister said.

He said since childhood one thing that has been ingrained in him is that “janata-janardan (public)” are a form of God and in a democracy they are powerful like God.

“For such a long period, the responsibilities that have been entrusted to me by the countrymen, I have made authentic and dedicated efforts to fulfil them,” he said.

BJP leaders on Wednesday heaped praise on Modi and his leadership as he entered his 20th year without a break as the head of an elected government, including close to 13 years as Chief Minister of Gujarat.

Mr. Modi, who turned 70 last month, started as a volunteer of the RSS and then served in the BJP’s organisation for many years before the party leadership sent him to Gujarat, his home state, as its chief minister in 2001.

Since then, he has never tasted electoral defeat and led the BJP to power in the state three straight times before steering the party to its biggest, until then, Lok Sabha poll win in 2014 and then scripting an even bigger win in the 2019 general elections.