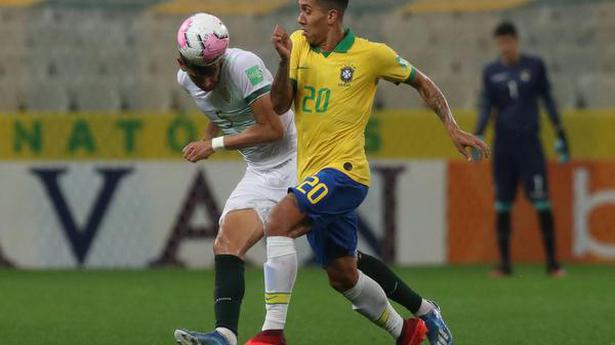 Brazil and Colombia had no trouble beating two of the weakest South American teams to score their first wins in the opening round of World Cup qualifiers.

The matches took place without fans due to health protocols from the COVID-19 pandemic.

Brazil easily beat Bolivia 5-0 in rainy Sao Paulo while Colombia scored all of its goals in a 3-0 victory in the first half in Barranquilla.

After the first round, Brazil, Colombia, Uruguay and Argentina lead with three points. Peru and Paraguay have one. Ecuador, Chile, Venezuela and Bolivia have none.

Defender Marquinhos opened the scoring in the 16th minute with a header. Roberto Firmino netted the first of his two goals in the 30th minute, just pushing the ball into an empty goal after a low cross from Renan Lodi.

Firmino made it 3-0 in the 49th minute, assisted by Neymar, putting the ball between the legs of goalkeeper Carlos Lampe. Then 19-year-old striker Rodrygo scored his first for the national team with a header in the 66th.

Philippe Coutinho ended the rout in the 73rd minute with a header, also assisted by Neymar.

Bolivia left some of its players in La Paz, looking towards the clash against Argentina at altitude.

The team is in crisis due to a political dispute involving the country’s soccer body and major teams.

The match in Barranquilla was marked by a serious left-ankle injury to Colombian defender Santiago Arias after he tackled Venezuelan striker Darwin Machis in the first few minutes.