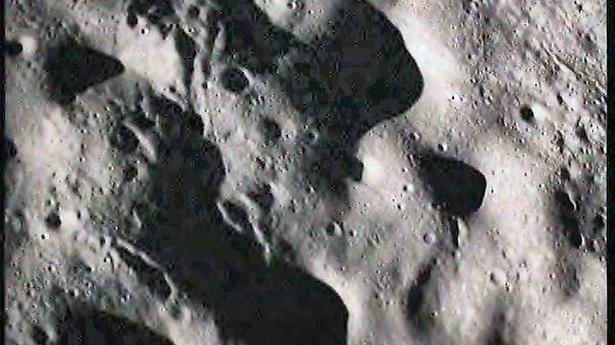 Images sent by Chandrayaan-1, India’s first lunar mission, suggest that the Moon may be rusting along the poles.

A recent study published in Science Advances found an oxidised iron mineral called hematite at high latitudes on the Moon. The team analysed the data acquired by the Moon Mineralogy Mapper onboard Chandrayaan-1.

Researchers say that this lunar hematite is formed through oxidation of the iron on the Moon’s surface by the oxygen from Earth’s upper atmosphere.

Hematite is a heavy and relatively hard oxide mineral found on Earth and Mars. The mineral is a form of iron oxide, or rust, produced when iron is exposed to oxygen and water.

Even though the surface of the Moon is known to have iron-rich rocks, it is not known for the presence of water and oxygen, which are the two elements needed to interact with iron to create rust. The Earth’s atmosphere could be protecting the Moon as well.

The Moon is constantly bombarded by solar particles coming off the Sun, known as solar wind. This results in the Earth and Moon being bombarded with hydrogen which is a reducer. Without an atmosphere to protect itself, the hydrogen should make it difficult for rust to form on the Moon.

But Earth’s magnetotail is capable of blocking out 99% of the solar wind aimed at the Moon when it is in its Full Moon phase which provides windows of opportunity for rust to form.

While the Moon lacks an atmosphere, it is in fact home to trace amounts of oxygen from Earth’s upper atmosphere carried by the Earth’s trailing magnetotail.

The Chandrayaan-1 data indicate that the Moon’s poles are home to water ice, but the hematite was detected far from that water ice.

The scientists propose that fast-moving dust particles that regularly pelt the Moon could release surface-borne water molecules, mixing them with iron in the lunar soil. Thus creating an opportunity for rust to form.