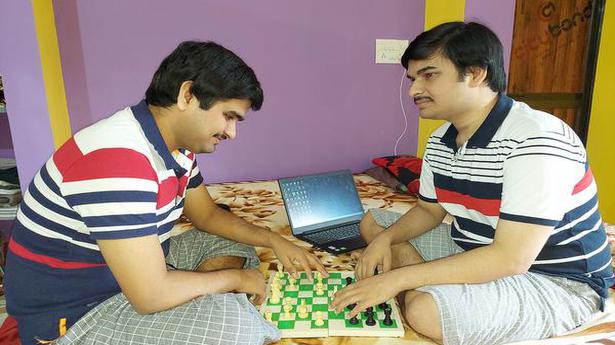 Self-taught chess prodigies from rural Odisha make the most of even the pandemic in their vision for life.

In a visionary feat, a visually challenged tutor from rural Odisha is teaching chess online to students in faraway New Jersey, United States. Soundarya Kumar Pradhan from Boden in Nuapada district is a self-taught chess player and a silver medallist in the Men’s Rapid Team Chess in the 2018 Asian Para Games held in Jakarta.

At a time when the coronavirus (COVID-19) pandemic has curbed the world in many ways, the Lucknow-based Chess Club Black and White (CCBW), which trains aspiring players, decided to deploy Mr. Pradhan’s prodigal skills. Mr. Pradhan told The Hindu, “One of founders of the organisation approached me to take a class on an experimental basis. I grabbed the offer. They were very impressed. I was requested to join them as guest faculty. All my students can see normally.”

At present, four students each in Lucknow and New Jersey are being trained by him. Two more students are expected to join from both cities shortly, said Mr. Pradhan, who is pursuing his B.Tech programme in computer science at the National Institute of Technology (NIT), Jamshedpur. He schedules the online training sessions at mutually convenient timings.

Boden, a block headquarter town that is little more than a big village, is a Naxal-affected region bordering Chhattisgarh. Till some years ago, it had only 2G Internet connectivity. This, however, did not stop Mr. Pradhan and his older brother, Prachurya Pradhan, also an international visually challenged chess player, from dreaming big. The older brother has also been giving online coaching to budding chess players.

Their father is a teacher in the local college and their mother is a homemaker. They were introduced to chess by their uncle very early in their lives. In time, the Internet proved to be the biggest source of chess lessons for the duo. Between them, they have visited eight countries in seven years and won several laurels for India.

“I improved my English-speaking ability by playing online chess games consistently. I can speak English with an American accent, which led to opportunities for coaching oversees players,” said Mr. Soundarya Pradhan.

“Since we could not play any tournament physically, the COVID-19 lockdown and shutdown came as a godsent opportunity to rectify weak points in our games. We have played some online tournaments during this period,” Mr. Prachurya Pradhan said.

Explaining moves on the 64-square board is very different from playing chess. “There are no established rules to train someone in chess. For example, if I move a piece towards the centre, it works in most cases. Sometimes, you gift the game to opponent with similar moves. There are lots of complexities involved in chess moves,” Mr. Soundarya Pradhan explained.

Mr. Soundarya Pradhan said, “We intentionally make one side play badly and make the other side play well so that one could find out what made a player win. If I try to explain a game between Magnus Carlsen and Viswanathan Anand, then the complexities are themselves so high that I might myself need few minutes to analyse.”

While teaching began with the necessity to make a living, it is now a passion for the brothers.

Amateur chess players at NIT-Jamshedpur also look up to Mr. Soundarya Pradhan for tips on the game. He has taken about 50-60 online classes in the past two-three months.

The brothers interact with their scribes for hours before taking their exams. “In the science subjects, you will find new symbols and diagrams cropping up each year. It is impossible for a visually-impaired student to dictate everything to his scribe or writer in the examination and then the writer interpreting them and writing papers on behalf of the examinee. What I do is that before my examinations, given the chance, I interact with my writer and train him on how to write for me,” said Mr. Soundarya Pradhan.

“I was asked by Indic AI, an online platform that provides accessible education for differently-abled, to train budding chess players. I have utilised the COVID-19 period to the fullest,” said Mr. Prachurya Pradhan, who has cleared the first two papers towards becoming a Chartered Accountant in the first chance — another rare feat for a visually challenged student.