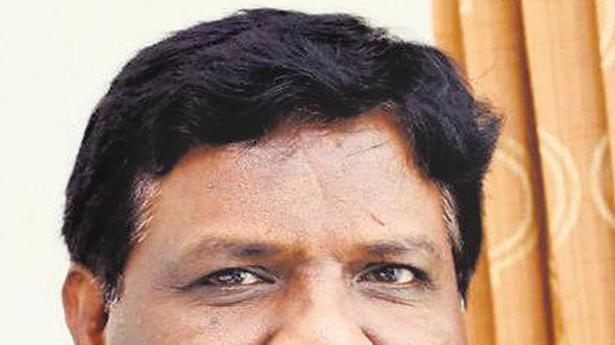 After taking up larger pan-India, pan-Tamil issues such as State rights, Viduthalai Chiruthaigal Katchi appears to be pivoting towards issues surrounding its primary support base — Adi Dravidars and Paraiyars — in politics and other spheres in Tamil Nadu.

The idea was put forward at a recent webinar on Rettaimalai Srinivasan, conducted by the party and presided over by its leader Thol. Thirumavalavan. The party’s general secretary and Villupuram MP D. Ravikumar was part of the webinar.

Expanding on the principle, in an interview with The Hindu, Mr. Ravikumar demanded that around 60 castes that come under the Scheduled Caste list in Tamil Nadu (barring the Devendrakula Vellalars and Arundhathiyars) be identified as ‘Adi Dravidars’.

“According to the 2011 census, there are 76 castes in SC list. Out of these, 2 castes have no members; 14 have already separated – 7 identify themselves as ‘Arundhathiyars’ and 7 more are demanding that they be recognised as ‘Devendrakula Vellalars’ and be removed from the SC list. Out of these 60 castes, Adi Dravidars and Paraiyars constitute around 90 lakh in terms of population. If we identify the 60 castes as Adi Dravidars, it will cross 1 crore people in terms of population and they will be around 65% of the total Dalit population in the State,” he said.

Mr. Ravikumar said that the Adi Dravidar (and Paraiyar) community had been systematically sidelined – when it comes to representation in jobs, education and also in terms of political importance in the State – despite being such a huge population.

“Despite the numbers, we have never been given proper representation or political importance in the State. Even the Adi Dravidar political icons are not respected while other caste icons are respected. The reason this is happening is because this community doesn’t claim its caste identity as much as it talks about annihilation of caste,” he said.

While the VCK had pursued a number of progressive larger political issues, he was asked if the decision to refocus its attention to the needs of the community will not result in party being labelled a ‘scheduled caste’ party once again. “We are not claiming the Paraiyar identity. Claiming sub-caste identity is against the Ambedkar’s concept of ‘Annihilation of caste’. We are highlighting this issue only in the interest of social justice. Usually, only numerically small communities will be sidelined in electoral politics, which works on the strength of numbers. Despite being one of the largest communities in Tamil Nadu, why is there such a big neglect?” he asked.

While Mr. Ravikumar acknowledged that Adi Dravidar identity and Paraiyar identity are often interchangeable in practical terms, he reiterated that the VCK is not attempting a caste-mobilisation. “Adi Dravidar is not a caste identity but a secular ‘casteless’ identity and was put forward by leaders such as Rettaimalai Srinivasan, M.C. Rajah and Ayothee Thass. We are asking that all 60 castes to be brought under ‘Adi Dravidar’ identity. Over time, they will inter-marry and sub-caste differences will wither away,” he said.

On the issue of imposing the ‘Adi Dravidar’ identity on other communities, Mr. Ravikumar said, “We cannot force anyone to accept this identity. Let this become a model for removing caste differences. If there are community leaders who don’t want to be called ‘Adi Dravidars’, they should be free to leave.”

Mr. Ravikumar believes that identifying 60 castes as ‘Adi Dravidars’ will result in removal of differences between them. “If you take Mukkulathors, all three castes have become one and are called Thevars. The same has happened with Vanniyars. The sub-group political and cultural differences have disappeared over time. The critics often ask: how can castes be annihilated when Scheduled Castes maintain differences within themselves? There is logic in this criticism and we have to start from here,” he said.