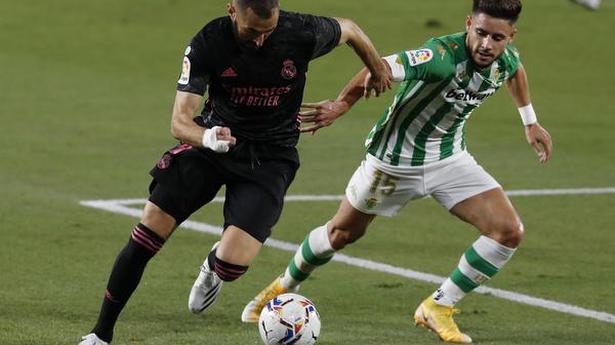 The review revealed that Betis defender Marc Bartra hit the ball with his arm during a brush with Madrid substitute Borja Mayoral.

Real Madrid had good reason to approve of the video assistant referee on Saturday.

A handball that had gone unnoticed on the field was spotted by the VAR near the end of Madrid’s match at Real Betis, sending Sergio Ramos to the spot to convert an 82nd-minute penalty and take a 3-2 victory in Seville.

The review revealed that Betis defender Marc Bartra hit the ball with his arm during a brush with Madrid substitute Borja Mayoral in the area. It seemed that Mayoral’s attempt to kick the ball pushed Bartra’s arm into the ball.

Manuel Pellegrini, Betis’ new coach and former Madrid manager, said he had no problem with the refereeing.

Madrid played with an extra man from the 67th when Betis defender Emerson was red-carded for fouling Luka Jovic with only the goalkeeper to beat. The referee’s decision was also aided by video.

Karim Benzema, the heart of Madrid’s title run last season, set up Federico Valverde for the 14th-minute opener, and pressured Emerson into scoring an own goal while trying to defend a dangerous cross to the French striker to make it 2-2. Benzema also had a strike that hit the crossbar and almost crossed the goal-line.

“The important thing is our mentality. We came out of halftime motivated to take control of the game,” Ramos said. “We should learn from this. We can’t always fight back.”

“We take away the feeling that we are doing things correctly,” Pellegrini said. “We created more chances than they did in the first half. (But) Real Madrid can score at any moment.”

Barcelona, Atlştico Madrid and Sevilla all open their league campaigns on Sunday after having their first two rounds postponed for playing in European competition in August.

In a surprise move, Zinedine Zidane gave a rare start to little used Jovic, the striker who scored only twice in limited minutes last season after transferring from Eintracht.

Zidane may send him back to the bench after a subdued performance that featured only his race toward the area once launched on the counterattack by Benzema that ended in the red-card foul by Emerson.

Valencia was fortunate against newly promoted Huesca to salvage 1-1 at home.

Daniel Wass got Valencia on the board in the 38th when his free kick intended as a cross into the area bounced untouched past four players, including Huesca goalkeeper Andrşs Fernŕndez, who was caught expecting a deflection.

The visitors came close to the winner when Shinji Okazaki volleyed off the crossbar.

Valencia lost striker Rodrigo Moreno to Leeds, winger Ferran Torres to Manchester City, and midfielder Dani Parejo to Villarreal in the offseason and did not replace them. The team has one win in three rounds.

“We have to be self-critical. We didn’t win because we didn’t play well, not because we need reinforcements,” new Valencia coach Javi Gracia said.

Mikel Merino passed for two goals as Real Sociedad beat Elche 3-0 for its first victory after drawing its first two matches. Merino, a midfielder, made his debut for Spain this month.

David Silva got his first start for Sociedad after returning to Spain following his title-filled stint at City.

Also, Getafe was held at winless Alavşs to 0-0.