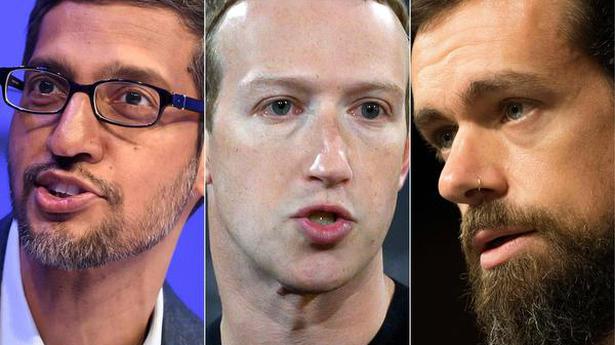 The executives’ testimony is needed “to reveal the extent of influence that their companies have over American speech during a critical time in our democratic process.” a Republican Senator said.

A Senate panel voted on Thursday to compel testimony from the CEOs of Facebook, Google and Twitter as lawmakers opened a new front in the battle over hate speech, misinformation and perceived political bias on social media a month before the presidential election.

The Senate Commerce Committee authorised subpoenas for Facebook CEO Mark Zuckerberg, Sundar Pichai of Google and Twitter’s Jack Dorsey to force them to appear at a planned hearing if they do not agree to do so voluntarily.

The executives’ testimony is needed “to reveal the extent of influence that their companies have over American speech during a critical time in our democratic process,” said Sen. Roger Wicker, a Mississippi Republican who heads the committee.

The committee’s unanimous vote marked the start of a new bipartisan initiative against Big Tech companies, which have been under increasing scrutiny in Washington and from State attorneys general over issues of competition, consumer privacy and hate speech.

Facebook, meanwhile, is expanding restrictions on political advertising, including new bans on messages claiming widespread voter fraud. The new prohibitions laid out in a blog post come days after President Donald Trump raised the prospect of mass fraud in the vote-by-mail process during a debate with Democratic rival Joe Biden.

With Mr. Trump leading the way, conservative Republicans have kept up a barrage of criticism of Silicon Valley’s social media platforms, which they accuse without evidence of deliberately suppressing conservative views.

The Justice Department has asked Congress to roll back long-held legal protections for online platforms, putting down a legislative marker in Mr. Trump’s drive against the social media giants. The proposed changes would strip some of the bedrock protections that have generally shielded the companies from legal responsibility for what people post on their platforms.

Mr. Trump signed an executive order earlier this year challenging the protections from lawsuits under a 1996 telecommunications law that has served as the foundation for unfettered speech on the internet.

Democrats, on the other hand, have focused their criticism of social media mainly on hate speech, misinformation and other content that can incite violence or keep people from voting. They have criticized Big Tech CEOs for failing to police content, homing in on the platforms’ role in hate crimes and the rise of white nationalism in the U.S.

The three CEOs are being summoned to testify as the Justice Department moves toward antitrust action against Google with a focus on the company’s dominance in online search and whether it was used to stifle competition and hurt consumers.

Google has argued that although its businesses are large, they are useful and beneficial to consumers. It maintains that its services face ample competition and have unleashed innovations that help people manage their lives. Most of its services are offered for free in exchange for personal information that helps Google sell ads.

Facebook, Amazon and Apple have also been targets of sweeping antitrust investigations by the Justice Department and the Federal Trade Commission.

In the House, a judiciary subcommittee has pursued its own bipartisan investigation of Big Tech’s market dominance. Mr. Zuckerberg and Mr. Pichai as well as Amazon CEO Jeff Bezos and Apple CEO Tim Cook testified at a highly charged hearing by the panel in July.

The subcommittee, which is expected to issue a report on its findings soon, held a hearing on Thursday at which experts discussed proposals to strengthen the antitrust laws and promote competition among Big Tech companies.

Speaking of the July hearing with the four CEOs, panel chairman Rep. David Cicilline, D-R.I., said, “We pressed them for answers about their business practices, including about the evidence we uncovered that they have exploited, entrenched and expanded their power in anti-competitive and abusive ways.”

“To put it simply, their answers were evasive,” Mr. Cicilline said.