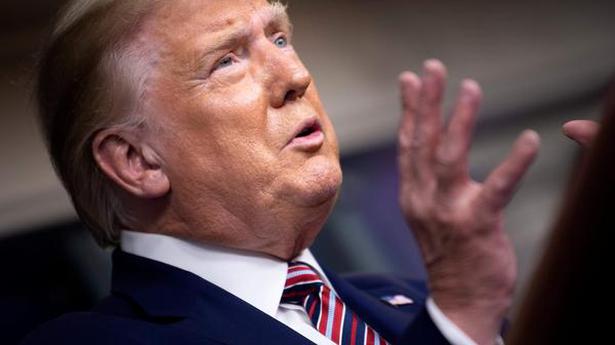 US. President Donald Trump has claimed victory over his Democratic challenger Joe Biden in their first Presidential debate, saying he exposed “the very dangerous agenda” of the former Vice President and held him accountable for the “47 years of his lies” in public life.

During the first of the three presidential debates in Cleveland, Ohio, on Tuesday night which was marked by angry interruptions and bitter accusations, the two candidates fiercely clashed over a number of issues, including racism, economy, climate, health care and the coronavirus.

Both the camps have declared victory in the debate.

Mr. Biden, 77, is “too weak” to lead this country, he said, claiming that his Democratic rival badly lost the debate.

You know Biden lost badly when his supporters are saying he should cancel the rest of the debates. Now I understand he’s cancelling the debates. Let’s see what happens. I think that’s not gonna be a good move for him, Mr. Trump said.

After the chaotic first debate, the Commission on Presidential Debates said that it’s adding new tools to maintain order to the upcoming debates.

Addressing his first election rally after the presidential debate with Mr. Biden, Mr. Trump told his cheering supporters that he is also running against the “corrupt far-left” media, socialists, and communist in the Democrat Party.

That’s what has happened for too long. We have turned it around but don’t forget when they turned it around I had to fight other things like a fake impeachment. I had to fight a lot of things that are not like that wasn’t in the agenda. Never forget and we fought it very well, and frankly, we had great support from the Republican Party except for one person, but that’s all right, he said.

Referring to the conversations that he had during the debate, Mr. Trump said, “Mr. Biden was saying he owns that socialism and extremism in his party. It’s not his party. It’s not Joe’s party. You’ve got Crazy Bernie, you have AOC plus three, you’ve got all these crazy people. These maniacs. You have the green new deal. How about the green new deal? He disavowed it, he said.

Mr. Trump claimed that “Biden has pledged to terminate his travel ban on jihadist regions, opening the flood gates to radical Islamic terrorism.”

Remember I used to talk about it all the time. I got it banned. Remember, they said you’d never be able to get them banned. Then I lost at the lower court. I lost at the Court of Appeals. And they said he lost, he lost. And huge stories. Then I won at the Supreme Court. They didn’t even report it, he said.

My administration is keeping terrorists, extremists, and criminals out of our country and we’re keeping them the hell out of Minnesota, he said.

Trump said that his performance in the last 437 months is better than that of Biden in his 47 years when he served as Senator from Delaware and Vice President of the country.

Now he’s pushing the most far-left platform in history. The Biden plan would destroy social security and destroy protections for people with pre-existing conditions, give free federal health care to all illegal aliens bankrupting medicare, he said.

A vote for Republicans, Mr. Trump said, is a “vote for safe communities, great jobs, and a limitless future for all of Americans”.

Over the next four years we will make a America into the manufacturing superpower of the world and we will end our reliance on China once and for all, said the President.

Earlier, interacting with reporters at the White House, Mr. Trump said he is looking forward to the other two debates in Florida and Tennessee. I don’t mind debating him. I hear he wants to get out of the debates. I don’t know. That’s up to him, he said.

Claiming that he won the first debate, he said I think he (Mr. Biden) was very weak. He was whining. We won the debate by almost every poll that I saw. If you look at the various polls. And I looked at about six of them, and we won every one of them.