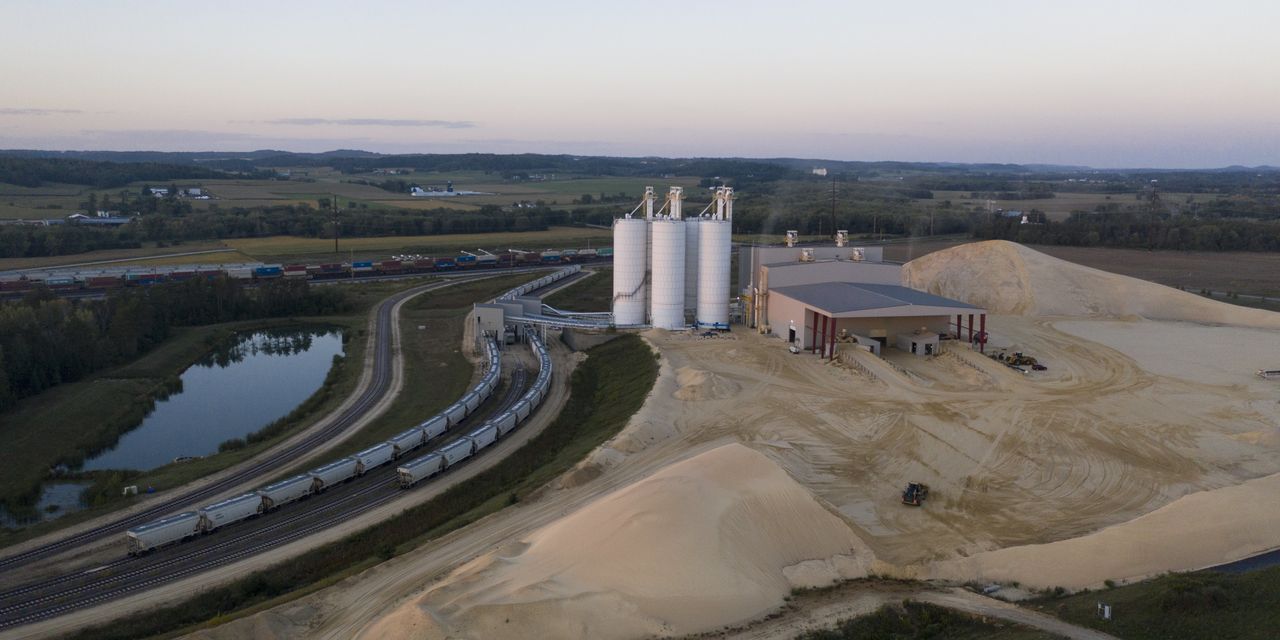 It brought relief for her and distress for some others in her community.

Digging stopped at the sand mine next door in Blair, Wis., which had rumbled since 2015 to supply drillers with silica they blasted into shale to let out oil and gas. The coronavirus pandemic and a switch by drillers to cheaper sand accomplished what locals like Mrs. Drangstveit, 77, couldn’t in their efforts to fight the mine at town meetings and court.

filed for bankruptcy in July. Rival

, an Ohio company with Wisconsin mines, did so in June. Other mines have closed or cut hours. “This has been the most peaceful summer of the last six years,” Mrs. Drangstveit said.

The peace has been disquieting for locals like Joshua Brush, who mowed grass at Hi-Crush properties. He lost his top customer and says $6,530.45 of unpaid invoices are “a huge financial hardship for me and my family.”

The collapse in oil prices this year has squeezed energy-centric economies from Russia to Venezuela, idled drilling rigs in the North Sea and Gulf of Mexico, bankrupted U.S. shale producers and helped push

out of the Dow Jones Industrial Average.

Wisconsin doesn’t produce a drop of oil or gas, but there has been a bust there, too, as there has been along the entire industrial ecosystem that supported fracking. Dozens of idled open-pit sand mines dot the farmland near where Wisconsin, Minnesota, Iowa and Illinois meet along the Mississippi River. Hundreds of mine workers in the sparsely populated region have lost jobs. Many others, like Mr. Brush, are suffering alongside them.

Companies that supplied trucks, lubricants and drilling tools have been bankrupted. Steelworkers in Youngstown, Ohio, have lost jobs providing pipe to the oil patch. Apartments and hotels hastily built to house roustabouts in North Dakota and remote parts of Texas have emptied.

Few of the shale boom’s sideshows have flamed out quite like Wisconsin’s Northern White sand. Local governments that envisioned the mines bringing long-term prosperity are looking at budget crunches. Investors have lost more than $10 billion on sand-mining stocks.

Miners of the region’s Northern White sand became stock-market stars a decade ago when oil-industry engineers settled on the pebbly grains ideal for hydraulic fracturing.

Frackers blast a slurry of sand, water and chemicals into fossil-fuel-bearing rocks. The grains prop open fissures to let oil and gas flow out. Energy companies prized Northern White for its crush strength, grain size and roundness, which helps prevent plugs. There is a sea of such sand beneath western Wisconsin topsoil.

The sand was long mined for glassmakers and cranberry growers. Suddenly, oil companies wanted trainloads delivered 1,200 miles away in West Texas as well as to drilling fields in Appalachia and North Dakota. Small farming towns allowed miners to gouge away at the countryside, hoping to pay for public services, create high-paying jobs and keep young people from leaving.

The sand mines were a mixed blessing, with disputes breaking out between residents wanting to participate in the shale-drilling boom that was helping to lift the economy from the 2007-09 recession and those decrying the environmental impact.

“We were in the hot seat, so to speak, in figuring out what to do about these mines,” said Jeff Hauser, mayor of Whitehall, Wis. “During all my time on the city council, it was one of the most emotional issues I had to deal with.”

Some residents saw spoiled countryside and worried about dust and noise. Others saw starting wages that were $5 to $8 an hour more than the typical jobs around that didn’t require a college degree. By 2012, there were about 60 frack-sand mines in Wisconsin and 20 more on the drawing board.

Mining companies provided local governments with tax payments, royalty checks and contributions to civic projects. In Blair, a city with a cheese factory and about 1,350 residents, funds from Hi-Crush helped pay for a new public swimming pool after the city annexed land for the company’s 1,285-acre mine. The annexation let Hi-Crush avoid the permitting process in surrounding Trempealeau County, which had a history of putting up obstacles to miners.

A Hi-Crush spokeswoman said: “The entire annexation process was completed openly, publicly, and in a fashion that provided all residents with the opportunity to participate.”

In nearby Independence, Wis., the company gave the police $27,000 to buy a dog, named Crush in the donor’s honor.

The Organization of the Petroleum Exporting Countries sent oil prices tumbling on Thanksgiving 2014 when it decided it wouldn’t hold back its output against the flood of U.S. shale oil. Frackers fought falling prices by boosting production. They drilled bigger wells and used more sand. Rail companies laid spurs to mines. In 2016, shale driller

revealed good results from pumping more than 50 million pounds of sand—about 1,000 truckloads—into a single Louisiana well. Other producers ramped up their sand use, especially in West Texas’ Permian Basin.

Nearly half of what drillers paid for Northern White was spent getting it from Wisconsin to the West Texas desert, said Rene Santos, an analyst with S&P Global Platts.

By 2017, oil producers knew shale wells petered out quickly. The Permian’s smaller-grain brown sand could keep fractures open long enough and came with smaller freight bills. Chesapeake executives who packed wells with Northern White were now telling investors the company was saving as much as $900,000 a well, or $100 million a year, using whatever sand was nearby.

Hi-Crush opened mines in Texas, piling more sand onto the market. In September 2018, Hi-Crush laid off 37 workers at a mine in Whitehall. Layoffs spread in 2019 and accelerated this year with the pandemic.

laid off Duane Wilke from his job as an environmental health and safety manager when it idled its plant in Sparta, Wis. The 54-year-old found a new job at a heating and ventilation company that offered a similar base salary but inferior benefits, he said. Former colleagues are still unemployed. U.S. Silica said it expects sand demand to recover with oil prices.

Before the slump, mining companies had paid annual bonuses, matched 401(k) contributions and raffled off prizes like hunting rifles and ice-fishing shacks at holiday parties. When Mr. Wilke began working in sand mining in 2011, he said, “I thought the job was going to be pretty secure until retirement.”

A wave of job losses hit the sand industry this spring after coronavirus lockdowns and a Saudi-Russian production feud sent crude prices tumbling. Hours worked in Wisconsin’s mines during the first half of 2020 fell more than two-thirds from the same period in 2018, according to the federal Mine Safety and Health Administration. By July, Wisconsin and neighboring states had lost more than 650 mine jobs, according to public layoff notices.

About a dozen mines remain operating in Wisconsin, down from 69 in 2016, according to the Wisconsin Department of Natural Resources. During a September visit, just a few workers could be seen at Hi-Crush’s sand mine in Blair. A mound of sand towered over a cornfield, and dozens of railcars sat idle.

When it filed for bankruptcy, Hi-Crush said it had $699 million of debt and obligations, including a monthly bill of more than $2.3 million for leases on roughly 5,000 railcars it was barely using. Covia claimed $1.6 billion, including a $5.9 million-a-month railcar bill.

What ripple effects from the energy bust have you seen? Join the conversation below.

Local governments are hurting. Beyond business and property taxes, miners often paid a fee for every ton they excavated, which added up to hundreds of thousands of dollars a year for some communities.

In Blair, taxes from Hi-Crush covered about one-tenth of this year’s $1.4 million municipal budget. That doesn’t include an annual $300,000 payment Hi-Crush agreed to pay the city as long as the mine runs.

Blair officials say they are bracing for the possibility that revenues from Hi-Crush next year may fall short, as they hold meetings this week to draft a 2021 spending plan. “Hi-Crush has been good to work with in the years they have been here,” said Susan Frederixon, Blair city clerk and treasurer.

The Hi-Crush spokeswoman said the company is committed to paying all taxes when due and will honor agreements with municipalities.

While the sand mines gave a boost to local economies, they also took an environmental toll. Neighbors worry chemicals used in sand processing could leach into drinking water. In 2018, Hi-Crush deliberately breached a retention pond in an effort to rescue a trapped bulldozer operator, releasing some 10 million gallons of orange-hued water onto farmers’ fields and the nearby Trempealeau River.

Testing by state officials found no immediate risk to human health, though it did find elevated levels of arsenic and some heavy metals. Hi-Crush said the release saved the operator’s life and committed to clean up afterward. “We are in the final stages of the restoration process,” the spokeswoman said.

And while sand-mining companies in Wisconsin are required to set aside money for reclamation, such efforts in open-pit mines rarely succeed, said Ted Auch, an environmental scientist at FracTracker Alliance, a nonprofit that tracks fracking’s impact: “The inherent fertility of these sites is lost.”

Workers excavate at Smart Sand’s mine near Oakdale, Wis., which remains open. A series of processing steps follows.

Recently mined sand goes onto a conveyor. Sand from this region is called Northern White.

Piles of sand sit to dry. Drillers prize Northern White for the strength and roundness of its grains, which help it prop open fissures during fracking.

The site’s scale and access to two major railroads have helped it survive the industry’s slowdown, Smart Sand says.

Smart Sand says about 120 employees work at its Oakdale mine, down from more than 200 during periods of greater demand.

Some mining companies believe the biggest and most efficient mines will rumble again once oil demand picks up. In September, workers shuttled around loaders at

mine near Oakdale, Wis., which remained open with reduced staff thanks to its scale and access to two major railroads, the company said.

“Will all the mines come back? Probably not,” said Thomas Young, a Smart Sand manager and president of the Wisconsin Industrial Sand Association. He sees hope in research showing wells are more productive over time when fracked with Northern White than with Texas sand.

Wall Street and energy analysts are less optimistic. Even after the mine closures, sand supply is about double demand, said Mr. Santos of S&P Global Platts. The combined stock-market value of the remaining miners is under $300 million these days, off more than $10 billion from their peak. 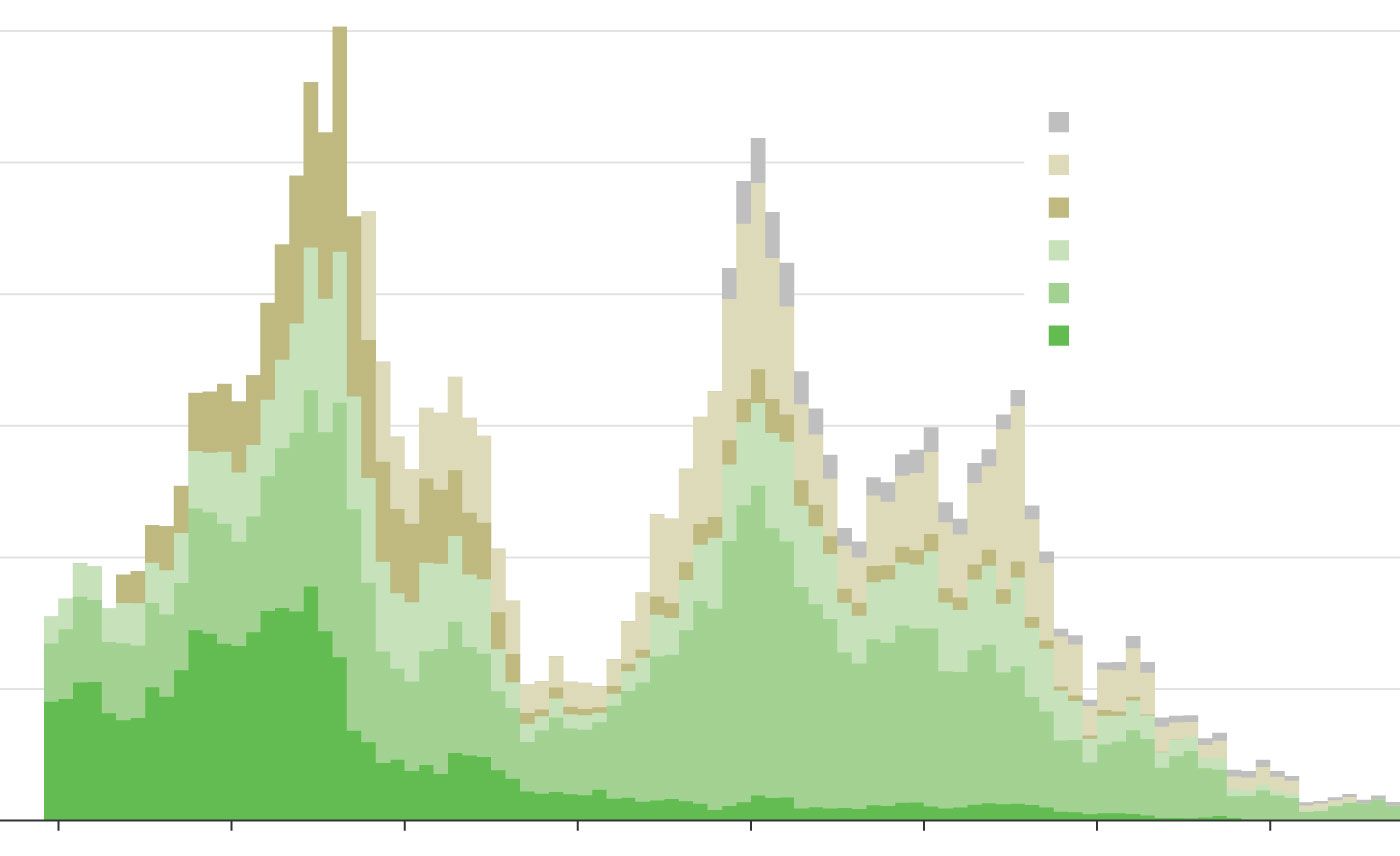 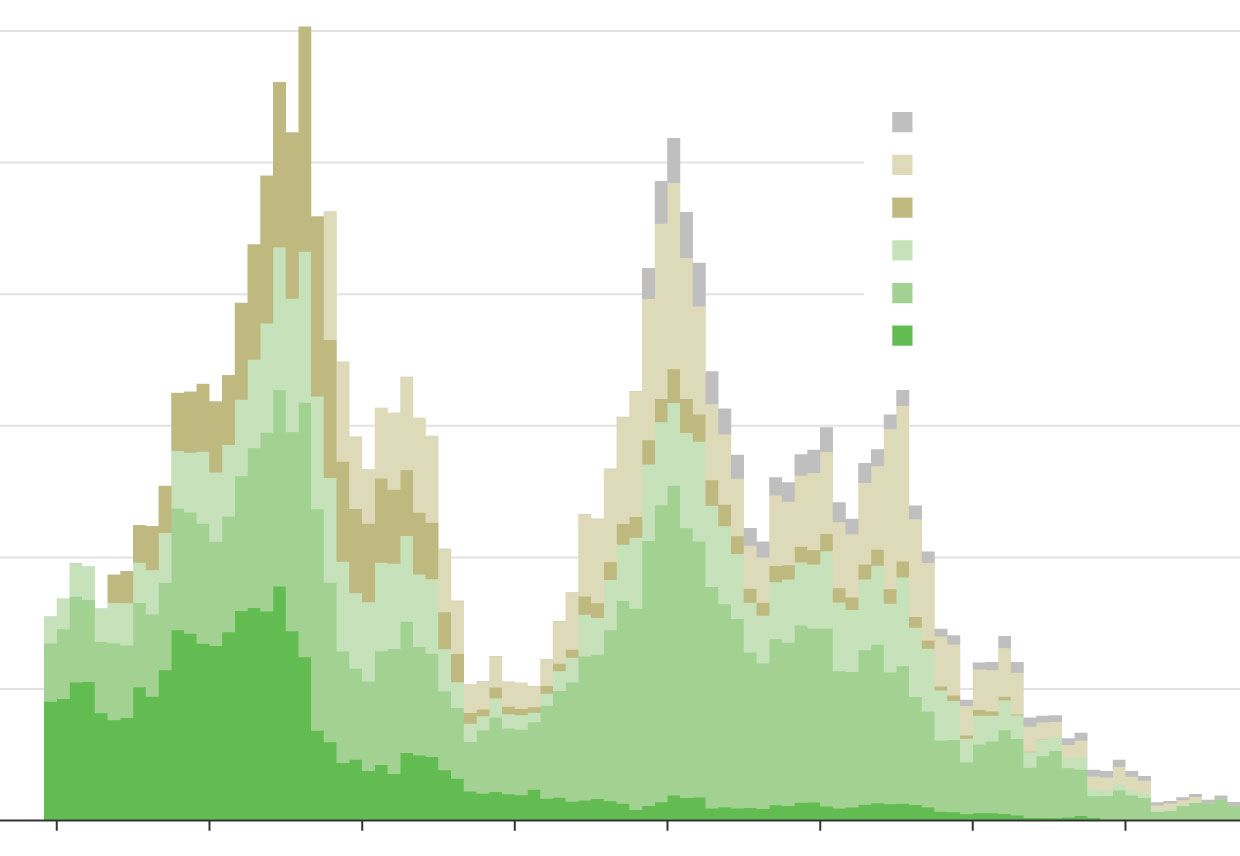 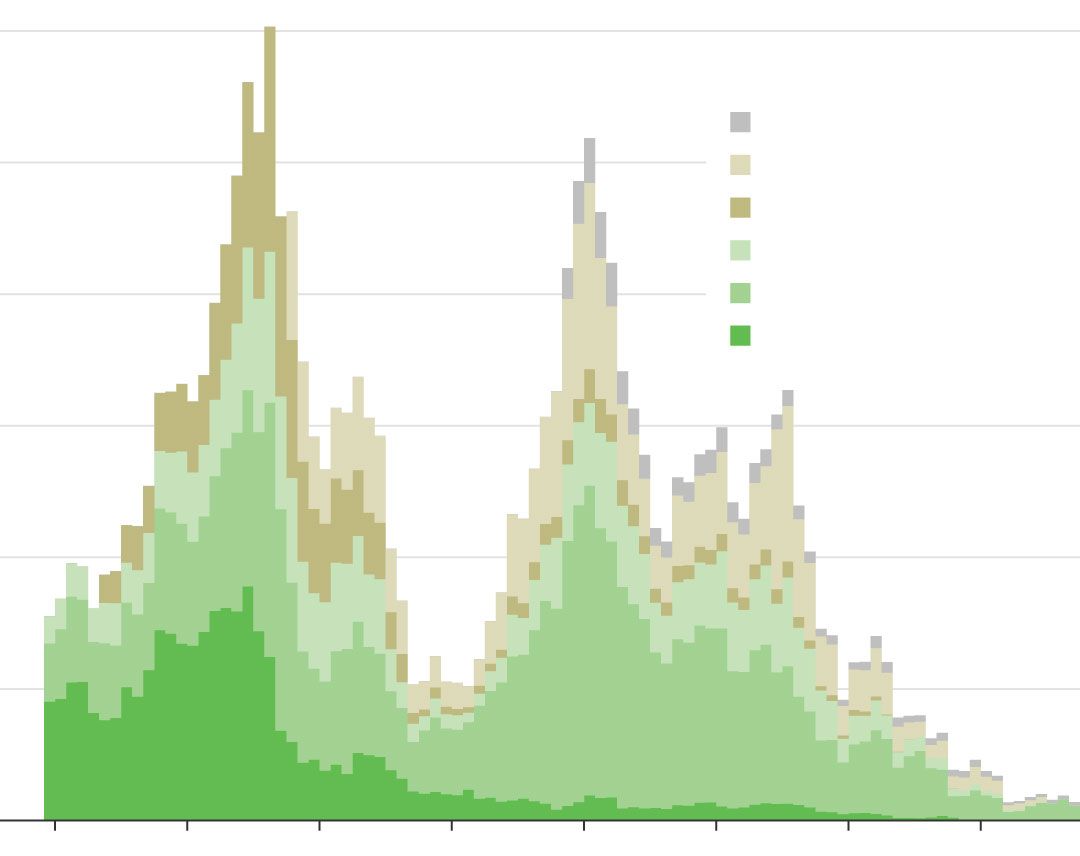 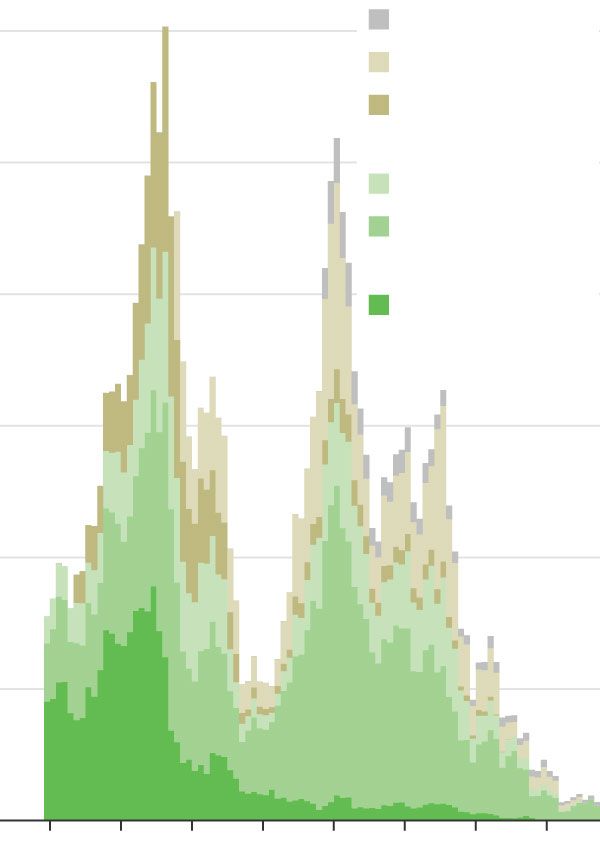 Marc Bianchi, a Cowen Inc. analyst who studies the miners, used to line up first to question executives during earnings calls and then spend days parsing the results with excited investors. His phone no longer rings after quarterly results come out.