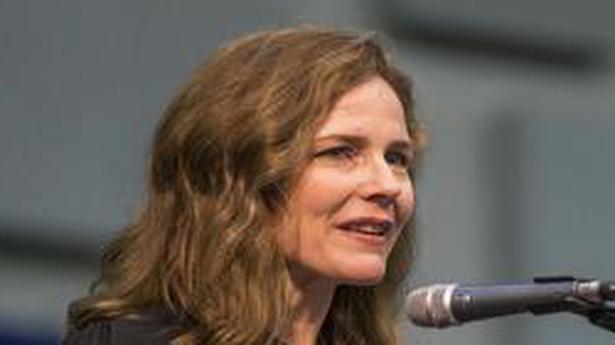 Why do the parties seek control of the judiciary? How will this affect the presidential election?

The story so far: U.S. President Donald Trump is expected to nominate Amy Coney Barrett, a 48-year-old circuit judge, to succeed Ruth Bader Ginsburg as justice on the Supreme Court, according to the U.S. media at the time of going to print. Ginsburg died on September 18, at 87. Ms. Barrett is the third justice that Mr. Trump nominates to the Supreme Court.

The Senate has to confirm her nomination after a hearing before the Senate Judiciary Committee. The leadership of the Republican Party, which has a 53-47 majority in the Senate, has said a vote will be scheduled before the U.S. elections on November 3. The current Senate will be alive several weeks after the elections, however.

Why is there a controversy?

In February 2016, the Republican-majority Senate refused to vote on Barack Obama’s nominee to the Supreme Court, Merrick Garland, arguing that no President should appoint a justice in an election year. The same leadership has now made a U-turn. It now argues that the situation this year is different because the White House and the Senate are both under the same party’s control. Democrats say this is hypocrisy. Democrats also believe the confirmation process will be hurried. Republicans claim there have been faster confirmations in the past.

Why do parties seek control of the judiciary?

Ginsburg was a liberal icon. The conservatives had a 5-4 majority until now on the nine-member Bench. With a new conservative judge, the balance will tilt conservative 6-3. The U.S. is deeply divided over several questions of justice and liberty that are winding their way to the highest court for adjudication. Appointments are for life and a justice would be able to influence the course of the nation for several decades. There are two contending visions for the judiciary at play for long. The Originalists argue that the meaning of the constitutional text is fixed at the time of its framing. Living constitutionalists says it is a dynamic document. Originalists practise judicial restraint, while the living constitutionalists push the boundaries of judicial activism. One must, however, be aware that this classification is not a neat binary. “In my own judicial career, I’ve written many originalist rulings with so-called ‘liberal’ results,” Neil M. Gorsuch, Mr. Trump’s first nominee to the Supreme Court, writes in his book. Ms. Barrett, a devout Catholic, is an Originalist, and could have conservative views on abortion. Feminists and LGBTQ groups oppose her.

How will this affect the presidential election?

Mr. Trump had made a public pact with conservative voters who were initially sceptical of him that he would fill the judiciary with their allies, and he has kept this promise in the first term. The new vacancy is likely to be the singular issue for a lot of voters on both sides of the divide. Of the 792 active federal judges in the U.S., a quarter are Mr. Trump’s appointees.

Democrats say one Supreme Court appointment was stolen from them during the Obama presidency. They have opened a new debate on expanding the number of justices.

The confirmation of the justice has a more immediate political implication, as both parties are gearing up for an intense legal battle over this year’s election outcomes. Mr. Trump and his allies are openly challenging the unprecedented expansion of postal ballots this year. There is a possibility that outcomes in many jurisdictions will not be decided on election day. New rules regarding ballots are bound to generate a volley of election cases. The chances of the Supreme Court picking the winner of the Presidential contest are high this year.