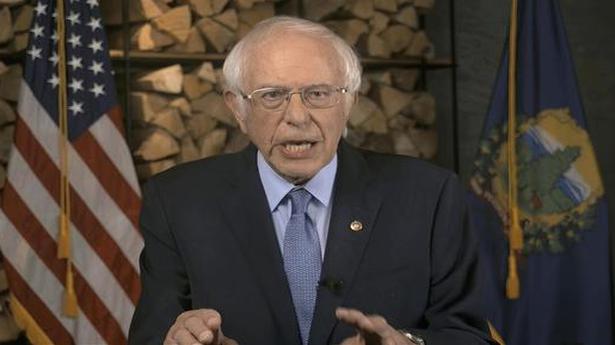 Bernie Sanders said he backed calls for a non-partisan commission to oversee the election and help reassure voters.

Former contender for the Democratic nomination, U.S. Senator Bernie Sanders jointed a host of voices that expressed alarm at U.S. President Donald Trump’s refusal to commit to the peaceful transfer of power if he loses the November election. Mr. Sanders said Mr. Trump is to be taken seriously.

“What I am going to talk about is something that, in my wildest dreams, I never thought I would be discussing.  And that is the need to make certain that the President of the United States, if he loses this election, will abide by the will of the voters and leave office peacefully,” Mr. Sanders said during his speech ‘Saving American Democracy’ at George Washington University, here in Washington DC. Mr. Sanders remarks came a day after Mr. Trump, when questioned at a press briefing, would not commit to the peaceful transfer of power.

“I think it is terribly important that we actually listen to, and take seriously, what Donald Trump is saying,” Mr. Sanders said.

“With less than 6 weeks left to go in this campaign it is my fervent hope that all Americans – Democrats, Republicans, independents, progressives, moderates, conservatives – come together to defend American democracy, our constitution and the rule of law. We must ensure, in this unprecedented moment in American history that this is an election that is free and fair…” Mr. Sanders said.

He called Mr. Trump a “pathological liar” with “strong authoritarian tendencies” and someone who is willing to undermine democracy to stay in power.

Mr. Trump has repeatedly floated conspiracy theories around vote by mail, claiming that Democrats are using it to commit voter fraud. Mr. Sanders cited several pieces of research – including from Republican and conservative sources – to demonstrate the very low incidence of voter fraud in the U.S.

Mr. Sanders listed a series of ways in which Mr. Trump, according to him, was trying to undermine the legitimacy of the elections.

“Trump has also urged his supporters to become, quote, ‘poll watchers,’ but what he is really saying is he wants his supporters, some of whom are members of armed militias, to intimidate voters,” Mr. Sanders said.

The senator described a hypothetical scenario in which Mr. Trump has a lead on the evening of November 3, but loses as postal ballots are counted. At which point – in Mr. Sanders’s example – Mr. Trump would say the postal ballots were invalid and claim victory.

“Furthermore, in states where Republicans control the legislature, it is possible that the election results will be ignored because of false accusations of voter fraud,” Mr. Sanders said, echoing another concern of Democrats.

One of the ways to counter these possibilities, Mr. Sanders said, was voter turnout (higher turnouts have traditionally benefitted Democrats).

“As someone who is strongly supporting Joe Biden, let’s be clear: A landslide victory for Biden will make it virtually impossible for Trump to deny the results and is our best means for defending democracy,” he said.