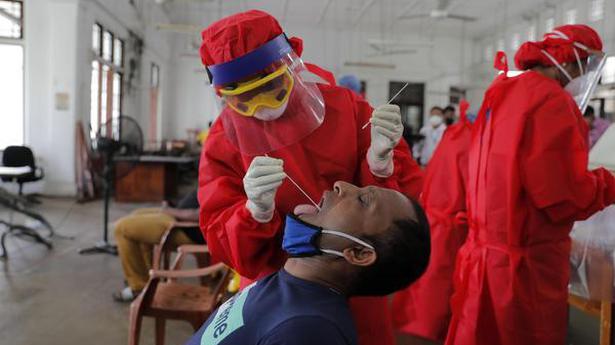 Positive cases linked to a garment factory increase to 1,022.

Days after Sri Lanka identified a new COVID-19 cluster, public health authorities, with the Army assisting them, are frantically tracing the source of the recent infections.

“We have an elaborate operation in place to find out the source of infection,” chief epidemiologist Dr. Sudath Samaraweera told The Hindu on Wednesday, even as the government widened the curfew to include districts around capital Colombo.

Sri Lanka had returned to near-normal life in the last couple of months after authorities effectively contained the spread of the virus. But authorities have had to step up targeted testing again, after a woman employed in a garment factory in Minuwangoda, about 40 km north of Colombo, tested positive this weekend. By Wednesday, the cluster rose to 1,022 persons, all employed in the factory. Subsequently the Ministry of Health banned public gatherings until further notice.

Meanwhile an Opposition legislator told Parliament on Wednesday about “some Indians” reportedly visiting the garment factory, located near the Bandaranaike International Airport, suggesting that was the source of the infections. However, Army Commander Lt. Gen. Shavendra Silva, who heads the National Operation Centre for Prevention of COVID-19 Outbreak, denied the claim. Investigations revealed that there was no evidence of Indians having visited the facility and the claims were “false”, he told media persons. Brandix, the company whose garment factory witnessed the recent outbreak, too said in a statement that: “We can confirm that no parties from India or any other country have had access to the facility during this period.”

Sri Lanka has so far reported 4,442 cases, 3,274 recoveries and 13 deaths since the coronavirus pandemic struck the island nation in March this year. Authorities said at least 64 Sri Lankan migrant workers, mostly employed in West Asian countries, succumbed to Covid-19 in their host countries.

President Gotabaya Rajapaksa has instructed officials to increase testing to establish the extent of the recent outbreak Prime Minister Mahinda Rajapaksa appealed to citizens and urged them not to panic. “I urge all #SriLankans to not panic, exercise caution, act responsibly & follow the health guidelines stipulated by @MoH_SriLanka. The #GoSL, healthcare authorities, the police & tri forces are working to ensure the latest outbreak of #COVIDー19 is contained,” he tweeted on Tuesday.