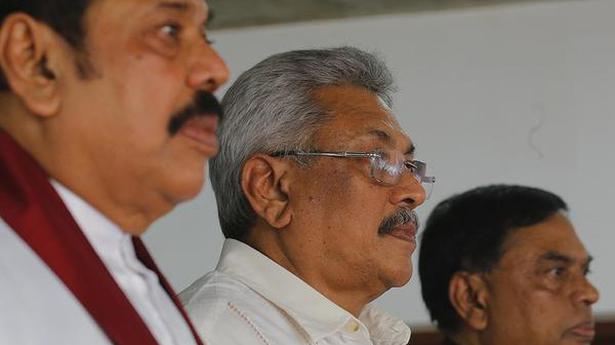 When former President Mahinda Rajapaksa lost the 2015 election, after his Cabinet colleague Maithripala Sirisena joined hands with rival Ranil Wickremesinghe in an unexpected alliance, his next moves were far from certain. In five years, not only is Mr. Rajapaksa back in power as he vowed, as the country’s Premier, but his new party has bulldozed Sri Lanka’s political terrain almost entirely, decimating the country’s two main national parties — the Sri Lanka Freedom Party (SLFP) to which Mr. Rajapaksa belonged, and the United National Party (UNP) that dominated the island’s political landscape for seven decades post-Independence.

The Sri Lanka Podujana Peramuna (SLPP or People’s Front), in less than four years after it was founded, has firmly established itself as the party of the people, mainly the majority Sinhala-Buddhist community, and its icons — the Rajapaksa brothers — as the country’s leaders. While the party’s rise has been quick, its making was marked by an early start, consistent organising, and a series of well-calibrated political manoeuvres. For complacent political rivals, the SLPP’s moves may not have appeared drastic, but they proved lethal.

The SLPP’s political origins can be traced to a weakening SLFP. When the Sirisena-led SLFP faction was in government, the remainder of the former United People’s Freedom Alliance, sat in Opposition, led by Mr. Rajapaksa with like-minded allies. Calling themselves the ‘Joint Opposition’, they became the most vocal critics of the cohabitation government led by Mr. Sirisena and Mr. Wickremesinghe.

Their awkward partnership not only manifested in the periodic tensions within, but also severely impacted governance giving the Joint Opposition enough ammunition to continue its attacks. That the Tamil National Alliance (TNA), which was the main Opposition for most part of the ‘national unity’ government’s term, was more a partner than an adversary gave the Rajapaksa faction a near-monopoly over criticising the government on most occasions.

Meanwhile, Basil Rajapaksa, the brain behind the SLPP, had begun the spadework for a new vehicle for the Rajapaksa brand. Out on bail in a case of alleged misappropriation of public funds, the former Minister and younger brother of Mahinda Rajapaksa, wasted no time in building a new party. The SLPP had all of Mahinda Rajapaksa’s political capital but none of the baggage — of incumbency and past failures — from the SLFP, in which he built his political career, rising to the country’s top office. The Rajapaksas no more needed a party with a Bandaranaike legacy. The SLPP was a party for the Rajapaksas. In May 2017, the Joint Opposition held a May Day rally at Colombo’s Galle Face Green, a large open area facing Colombo’s sea front. Two years after he was ousted, Mahinda Rajapaksa was greeted by a massive crowd thronging the venue. Seeing the sea of people, the Rajapaksas knew that their comeback was within touching distance. Basil Rajapaksa began intensifying mobilisation on the ground.

Their third brother Gotabaya Rajapaksa, who was Defence Secretary in Mahinda Rajapaksa’s government, began attracting professionals and intellectuals, with a stated mission of influencing “the moral and material development of Sri Lanka”. Tired of conventional politicians, several academics, business leaders and professionals gravitated towards his two outfits — Viyathmaga (Professionals for a better future) and Eliya (light).

The first electoral test for the SLPP came in February 2018, when Sri Lanka held its local authority elections. The Mahinda Rajapaksa-backed SLPP — he had not severed links with the SLFP or given up party membership then — secured a landslide win. The party’s pohottuwa (lotus bud) symbol — designed in maroon colour to match with Mr. Mahinda Rajapaksa’s characteristic scarf — made a huge impression, reaffirming chief architect Basil Rajapaksa’s astute electoral calculations. The Joint Opposition had by now fully morphed into the SLPP.

The going was very good for the SLPP, at least for eight months until Mr. Sirisena shocked the country with his dramatic move — sacking PM Wickremesinghe, appointing Mahinda Rajapaksa in his place, and prematurely dissolving Parliament. For 52 days, Mr. Rajapaksa was the purported Prime Minister. The momentum from the SLPP’s February poll victory was adversely impacted by that, as some of his own supporters were displeased with their leader choosing expedience over the law. The Supreme Court deemed Mr. Sirisena’s move illegal, and Mr. Rajapaksa resigned. Though he and the party had lost some sheen since February 2018, he gained more. He had further weakened the SLFP by then, sealed the split between the SLFP and UNP and most significantly, obtained the post of Leader of Opposition that he had coveted.

The following months saw a complete breakdown in governance — culminating in the security lapse ahead of the Easter terror attacks — and laid the red carpet for the SLPP. Except, the 19th Amendment — a 2015 legislation — prevented Mahinda Rajapaksa from contesting the presidential polls for the third time. The brothers put their might behind Gotabaya Rajapaksa, a former Lieutenant Colonel, pledging national security to a country terrified after a terrorist attack, along with development and prosperity. The promise of a strong leader, coupled with a provocative, nationalist rhetoric, did the trick.

In November 2019, opposition candidate Mr. Gotabaya Rajapaksa secured 52.25 % of the mandate and was elected President. Riding the huge mandate, he soon took control of running the country’s affairs, so much so that when it was time for the August general election, Prime Ministerial Mahinda Rajapksa needed Gotabaya Rajapksa almost as much as the President needed him prior to his own election. Following the landslide win in the August parliamentary polls, one of the first things President Rajapaksa ordered was the tabling of the 20th Amendment Bill in Parliament, which not only envisions an even stronger executive presidency, but reduces the Prime Minister to a ceremonial position. Today, the politically and electorally secure SLPP appeals most to the Sinhala-Buddhist constituency, especially its hard-line elements, while minorities remain at best sceptical or at worst, repulsed by its narrow, ethno-nationalist politics.

On the SLPP’s future role, Mr. Basil Rajapksa famously remarked that he would like to model the party on the Chinese Communist Party (CCP) and the Bharatiya Janata Party (BJP) in India, the “best two” examples.