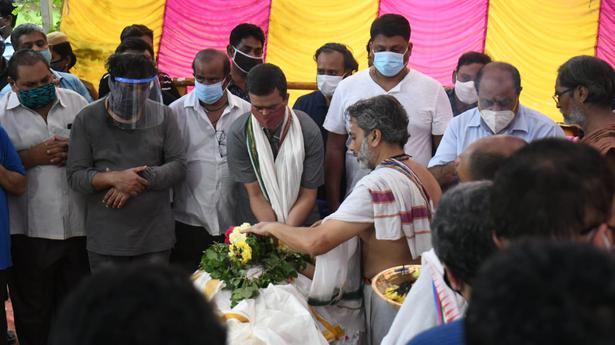 Legendary playback singer S.P. Balasubrahmanyam – SPB to his legions of fans – was laid to rest with full state honours on Saturday morning, amidst an outpouring of grief from fans across the world and his tinsel town peers.

As a mark of honour, the City Armed Reserve Police Personnel gave a gun salute and 26 personnel fired three rounds in the air before his body was placed in the pit at his farmhouse in Tamaraipakkam on the outskirts of Chennai.

The singer had died on Friday afternoon at a private hospital in the city, where he was admitted on August 5 after testing positive for COVID-19. While his body was initially brought to his residence in Nungambakkam, they later shifted it to his farm house in Tamaraipakkam near Redhills and placed in a cold glass panelled casket.

From Saturday morning, there was a steady stream of his fans, who came there to pay their last respects.

Among the members of the Tamil film industry, who paid their last respects to the singer were playback singer Mano, directors Bharathiraaja and Ameer, actors Vijay and Arjun, and music composer Devi Sri Prasad.

“His talent has always been respected and honoured by both the central and State governments. He will befittingly be given full state honours as well,” said Director Bharathiraaja, who shared a close friendship spanning decades, with the singer. He paid his last respects to SPB and met his family members on Saturday morning.

The police had made an elaborate arrangement to ensure the maintenance of physical distancing norms. Over 1,000 police personnel from Chennai City Police and Tiruvallur district police deployed were deployed at the burial site. Wooden barricades were set up to regulate the visitors and the police allowed 150 members only at regular intervals from morning.

At around 10.20 a.m., his family members led by son S.P. Charan began to perform the last rites.

From Friday afternoon, fans shared their memories on social media – sharing songs he had sung across languages and reminiscing about his live performances. Over the last decade, SPB had been active on reality shows as well and several videos of his praising and encouraging young contestants were shared by fans.