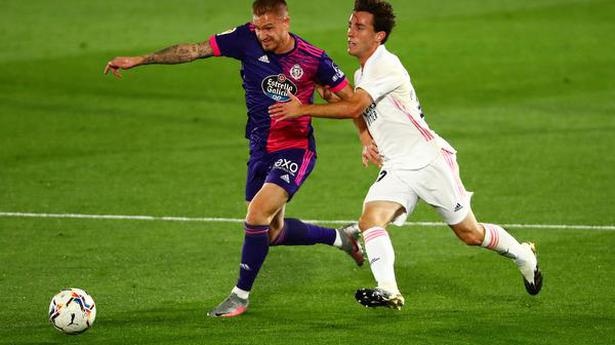 Vinícius Júnior broke the deadlock for Real Madrid from close range after a defensive mistake by Valladolid defenders inside the area.

Vinícius Júnior scored after coming off the bench as Real Madrid defeated Valladolid 1-0 on Wednesday for its second win in a row in the Spanish league, while Atlético Madrid was held to a scoreless draw against promoted Huesca in a disappointing first start for Luis Suŕrez.

Vinícius Júnior netted the winner midway through the second half after Madrid’s forwards struggled again in attack. The young Brazilian broke the deadlock from close range after a defensive mistake by Valladolid defenders inside the area.

Madrid coach Zinedine Zidane started the match with two strikers, but Karim Benzema also was far from his best up front.

“It was difficult in the first half, but we changed the game after we switched the scheme (to a 4-3-3) and I entered the match with (Marco) Asensio,” Vinícius Júnior said.

Vinícius Júnior became the first forward to score for Madrid this season after it opened its title-defense campaign with a 0-0 draw at Real Sociedad and a 3-2 win against Real Betis thanks to a late penalty kick converted by defender Sergio Ramos.

Madrid again was without Eden Hazard, who had recovered from an ankle injury but now is nursing a right leg muscle injury.

The victory left Madrid at the top of the standings with seven points, along with Getafe, Valencia and Villarreal. Madrid and Getafe have a game in hand.

Valladolid, winless after four matches, had a few good chances on counterattacks and forced Madrid goalkeeper Thibaut Courtois to make a couple of good saves.

Barcelona and Atlético had their first two matches postponed because of the participation in the quarterfinals of the Champions League in August. Madrid had one game postponed after reaching the round of 16.

Suarez followed up his promising debut for Atlético with a lackluster performance in his first start on Wednesday.

Three days after scoring two goals and setting up another in about 20 minutes off the bench in Atlético’s 6-1 win over Granada, Suarez struggled in the team’s 0-0 draw at Huesca.

The former Barcelona player started alongside young Portugal forward João Félix, but the duo failed to spark the attack for Diego Simeone’s team.

The Uruguay striker had the game’s best chance after a perfect through-ball by Félix in the 59th minute, but he failed to get past goalkeeper Andrés Fernández inside the area and eventually had his shot blocked.

Suarez was substituted by Diego Costa less than three minutes after the miss, but the Brazilian-born striker also couldn’t do much up front. Atlético pressured near the end but failed to capitalise on a couple of good opportunities from inside the area.

“What we did in the second half is the right path,” Simeone said. “We just couldn’t capitalize on our chances.”

Villarreal rebounded from a 4-0 loss at Barcelona with a 3-1 home win against Alavés.

Paco Alcácer opened the scoring in the 13th minute and sealed the victory in the 67th. Gerard Moreno converted a 45th-minute penalty kick after Alavés had equalized through Édgar Méndez in the 36th.

Alavés remains winless after four rounds. Villarreal had a draw and a win before the loss to Barcelona at the Camp Nou Stadium.