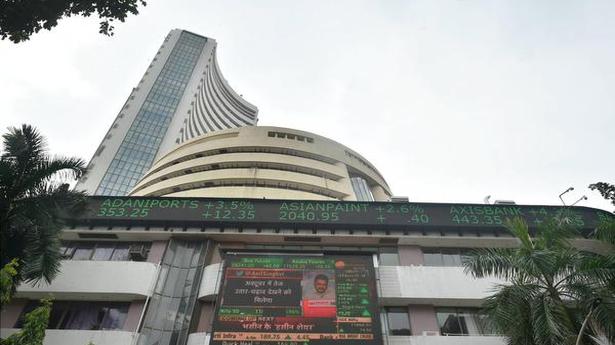 Equity benchmark index Sensex rallied 327 points on Friday, extending gains for the seventh straight session on the back of financial stocks after the RBI left benchmark rate unchanged but decided to maintain an accommodative stance.

ICICI Bank was the top gainer in the Sensex pack, rising around 3 %, followed by Axis Bank, HDFC twins, SBI, L&T, ONGC and Infosys.

Rate-sensitive banking and financial stocks ended on a positive note, with BSE bankex and finance rising up to 2.64 %, while realty and auto indices closed in the red.

While announcing the MPC decisions, RBI Governor Shaktikanta Das said the benchmark repurchase (repo) rate has been left unchanged at 4 %.

Consequently, the reverse repo rate will also continue to earn 3.35 % for banks for their deposits kept with RBI.

Mr. Das said the Indian economy is entering into a decisive phase in the fight against coronavirus.

He also stated that the contraction in economic growth witnessed in the April-June quarter of the fiscal is “behind us”, adding that the GDP was likely to turn positive at 0.5 % in the January-March quarter of the current financial year.

The policy review outcome was as per expectations, but it was the good commentary on GDP outlook and the liquidity measures announced that cheered the D-Street, said Jimeet Modi, Founder and CEO of Samco Group.

The central bank has given forecast of 9.5 % contraction in GDP this fiscal but the silver lining lies in the expectations of GDP growth possibly turning positive by January-March quarter (Q4),” said Gaurav Dua, SVP, Head – Capital Market Strategy & Investments, Sharekhan by BNP Paribas.

Overall, the monetary policy is reassuring for the equity investors, he said, adding that it could provide the much required support to the banking stocks that have been lagging in the recent equity market rally.

Meanwhile, bourses in Shanghai ended on a positive note while Hong Kong and Tokyo ended in the red.

International oil benchmark Brent crude was trading 0.85 % higher at USD 42.97 per barrel. In the forex market, the rupee rose by 8 paise to 73.15 against the U.S. Dollar.