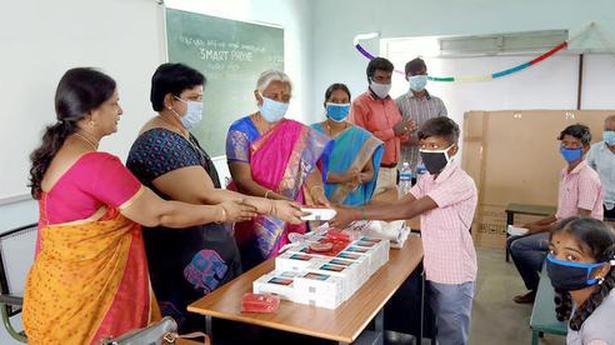 A group of teachers at the government school in Elambalur in Perambalur district has made sure that 44 students, including two in Class XI, attend online classes by providing them with mobile phones and SIM cards.

The joint initiative of four teachers was the brainchild of K. Bairavi, a mathematics teacher, who found that students were not responding to messages sent by the school. “When the government asked us to begin online classes, none of the phone numbers furnished by students was active. Of the 16 students in English medium and 26 in Tamil medium in Class X, only two replied to our messages,” said Ms. Bairavi.

The teachers then went from door to door and learnt that the phone numbers pertained to devices of their parents. Ms. Bairavi consulted her family about the idea of buying phones and SIM cards for students. She realised that Class 10 students were worried that with no Internet access, they could lose an academic year.

Ms. Bairavi’s daughter urged her to buy phones for all her students. At the cost of ₹1 lakh, 16 students of the English medium received phones with active Internet connections. Inspired by her, other teachers in the school — R. Selvaraj and S. Suresh — along with Perambalur MLA R. Tamilselvan, who heads the Parent-Teachers Association, and the headmistress of a private school, too, agreed to donate mobile phones. “We got two donors from Qatar, who were willing to help the students,” Mr. Selvaraj said.

Forty four handsets were purchased, two of which were given to two Class 11 students who performed well in Class 10. “I have decided to take the expenses of recharging the phones on a monthly-basis. It will cost ₹4,000, but it will ensure that my children learn,” she said.

Ms. Bairavi received tremendous response on posting about the need for donations on social media. “We did not expect such an overwhelming response. I requested the prospective donors to help the children who live near their houses to attend school in any small way possible,” she added.