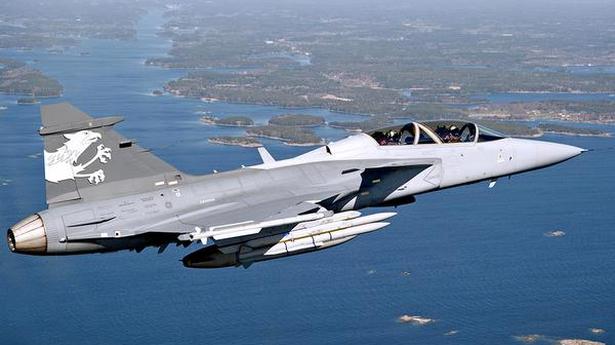 A senior official of the Swedish defence company SAAB on Wednesday called the 74% Foreign Direct Investment (FDI) in defence “a very attractive model” but sought clarity if the Strategic Partnership (SP) model of the Defence Procurement Procedure (DPP) comes under it.

The company proposed to set up an Indian Aircraft Company (INAC), if Gripen fighter jet is selected by the Indian Air Force (IAF) in the 114 fighter tender under way, Mats Palmberg, Head of SAAB’s Gripen India campaign, said. The Original Equipment Manufacturers (OEM) should have control over the set-up so that “they can take responsibility and meet customer expectations”, he observed.

In a virtual interaction, Mr. Palmberg said, “The 74% is a very attractive model. But there is no clarity if Chapter 7 comes under it… We need some clarity on this”.

The SP model meant to promote the private industry is under Chapter 7 in the DPP.

There were still some issues to be clarified in the SP model such as liability issues. An OEM having a bigger stake was better but that doesn’t have to be forever, he said.

Eva Soderstrom, Head of Industrial Cooperation, said SAAB had offered the IAF the latest Gripen-E and also the Gripen-F, a twin-seater variant under development.

The INAC was a dual track proposal, Mr. Palmberg said. The first part was related to the Gripen jet and the second one was more of technological support to indigenous fighter programmes such as the Light Combat aircraft (LCA)-MK2 and Advanced Medium Combat Aircraft (AMCA) under development. There was no contradiction between the 114 aircraft tender and the indigenous programmes, he noted.

It was an industrial hub that was planned in the country from manufacture and delivery, maintenance, refit and overhaul (MRO) and then the design capability for further improvements. “We want to see that the aircraft does not have to be taken to Sweden at any point for overhaul or anything,” he asserted.

The IAF is currently evaluating proposals submitted by global OEMs for its 114 aircraft proposal. After finalising the specifications, the case will be put up before the Defence Acquisition Council (DAC) for granting the Acceptance of Necessity (AoN), following which the Request For Proposal (RFP) will be issued.

In this regard, Mr. Palmberg said there was scope for partnership with Hindustan Aeronautics Limited (HAL) in the INAC, including as an equity partner. SAAB was open to partnerships both with the private industry and defence public sector undertakings, he added.