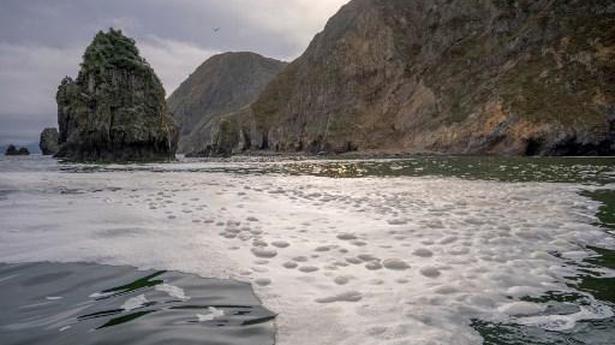 The Far Eastern Federal University said in a statement the pollution was between 100 and 300 metres wide in some places, had a green hue and was creating an unusual foam while floating south along the Russian coast.

The waste was previously thought to be stationary and confined mostly to one beach, but researchers who carried out aerial photography said it was “gradually moving south” towards the contested Kuril Islands “without diminishing in size”.

Kirill Vinnikov, the head of a biology lab at the university, also noted that the pollution was not disintegrating and had clear dimensions. The statement said researchers collected pollution samples from a helicopter despite difficult weather conditions and an analysis will be carried out in the Far East city of Vladivostok.

Dead sea life is seen washed up on the shore due to unexplained water pollution in Kamchatka region, Russia October 5, 2020.

Locals sounded the alarm in late September as surfers experienced stinging eyes from the water and sea creatures including seals, octopuses and sea urchins washed up dead.

The Russian branch of Greenpeace has described the situation as an “ecological disaster”.

Russian authorities on Wednesday opened a criminal probe, citing the illegal handling of dangerous substances and “pollution of the marine environment”.

Kamchatka governor Vladimir Solodov previously said the most likely source was the Kozelsky site, 35 kilometres outside the region’s main city Petropavlovsk-Kamchatksy and used since the Soviet era to store poisonous substances deep in the ground.

Analysts told the Russian investigative newspaper Novaya Gazeta and the RIA Novosti news agency that toxic rocket fuel from a nearby military facility could be responsible for the damage.

This handout picture released by Greenpeace on October 5, 2020 shows the water area near the Khalaktyr beach on the Kamchatka peninsula

Yet Solodov on Thursday ruled out that heptyl was behind the incident, saying samples had come back negative for the rocket fuel. He said tests indicated the presence of fuel products but not in high enough concentrations to wipe out marine animals in such large numbers.

The governor, who took office several weeks ago, said around 20 people were examined and eight were diagnosed with third-degree corneal burns.