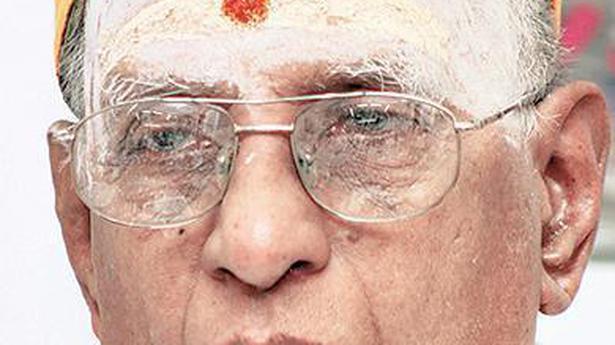 Hindu Munnani founder Rama Gopalan, who had tested positive for COVID-19, died on Wednesday evening at a private hospital in Chennai. He was 94.

Following the Meenakshipuram conversions in February 1981, in which around 200 Dalit families of the village converted to Islam as caste Hindus practiced untouchability, he tried to rally Hindus and prevent such conversions.

He had said that Hindu Munnani was formed to protect the religion from attacks by Islam, Christianity, Communism and those claiming to be rationalists.

He had also said that Hindus practicing untouchability and caste discrimination were causing damage to the religion.

In 1984, he escaped a bid on his life at the Madurai railway station. He was among those instrumental in turning immersion processions of Vinayaka idols into a public event in the last 30 years. Earlier, the tradition was to celebrate Vinayaka Chaturthi at houses and temples.

In an interview in 2015 with The Hindu Group’s Frontline magazine, Mr. Gopalan hit out at Dravidian parties and the Communists. “Who says Tamil Nadu is a State of secularism? It is anti-Hindu. These acts of double standards and deceit are for vote-bank politics, which has corrupted the system,” Mr. Gopalan had said.

Hindu Munnani State president Kadeswara C. Subramaniam said the organisation’s flags would be flown at half-mast across the State, and condolence meetings would be organised.

Governor Banwarilal Purohit, in a condolence message, said, “Fondly known as Veera Thuravi, he dedicated his entire life for the welfare of the people of Tamil Nadu.”

In a statement, Mr. Palaniswami said Mr. Gopalan had taken part in the freedom struggle and was a guide to Hindu Munnani. He also extended his condolences to members of the movement.

DMK president M.K. Stalin, in a tweet, said: “Although there were ideological differences, he was a good friend of Kalaignar [former Chief Minister M. Karunanidhi]”.

Dravidar Kazhagam leader K. Veeramani recalled that despite ideological differences, Mr. Gopalan and he would exchange pleasantries and enquire about each other’s well-being whenever they met.

Terming his death a big loss for the Hindus of Tamil Nadu, BJP State president L. Murugan said Mr. Gopalan fought to bring unity among Hindus, and fought against religious conversions and injustice meted out to Hindus. He had also raised his voice against cow slaughter.