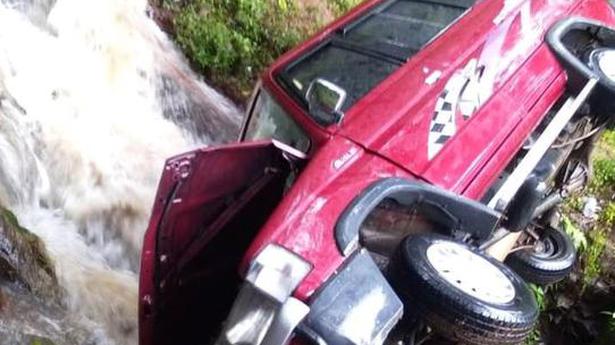 Other parts of Kodagu, including Shanthalli, Suntikoppa, and Kushalnagar, also received heavy rain that was uniform and widespread.

Heavy rain lashed parts of south Karnataka, including Kodagu, throwing life out of gear in the last couple of days.

Other parts of Kodagu, including Shanthalli, Suntikoppa, and Kushalnagar, also received heavy rain that was uniform and widespread.

In the adjoining district of Mysuru, the rain was intermittent but the outflow from Kabini reservoir in H.D. Kote taluk was stepped up on Sunday. This was on account of heavy rain in the catchment area of the river upstream of the dam. As a result, the dam authorities increased the outflow to the rate of nearly 35,000 cusecs, while the inflow was at around 26,000 cusecs. The water level in the reservoir was at its maximum of 2,284 feet on Sunday.

The rate of inflow to Krishnaraja Sagar (KRS) in Mandya district has also increased. The water level was 124.67 ft, as against the full reservoir level of 124.8 feet. But for local flooding and inundation of farm lands, no major damage has been reported upstream of the KRS and in Kodagu. However, a flood warning has been issued in the wake of the increasing water level in the reservoir.

Parts of Mudigere, Koppa, N.R. Pura, and Sringeri taluks in Chikkamagaluru district also received heavy rain on Sunday, hitting life in the district that is known to have many tourist places. The doors had been reopened to travellers only recently after the COVID-19 lockdown was relaxed.

Heavy rain was reported at Kottigehara, Balur, and Kalasa in Mudigere taluk. Hebbale bridge, across Bhadra river on the road connecting Kalasa and Horanadu, was submerged, affecting vehicular movement. The rivers have been in spate in Chikkamagaluru district.

A four-wheeler fell off the road near Kelaguru and seven passengers from Bengaluru suffered minor injuries.