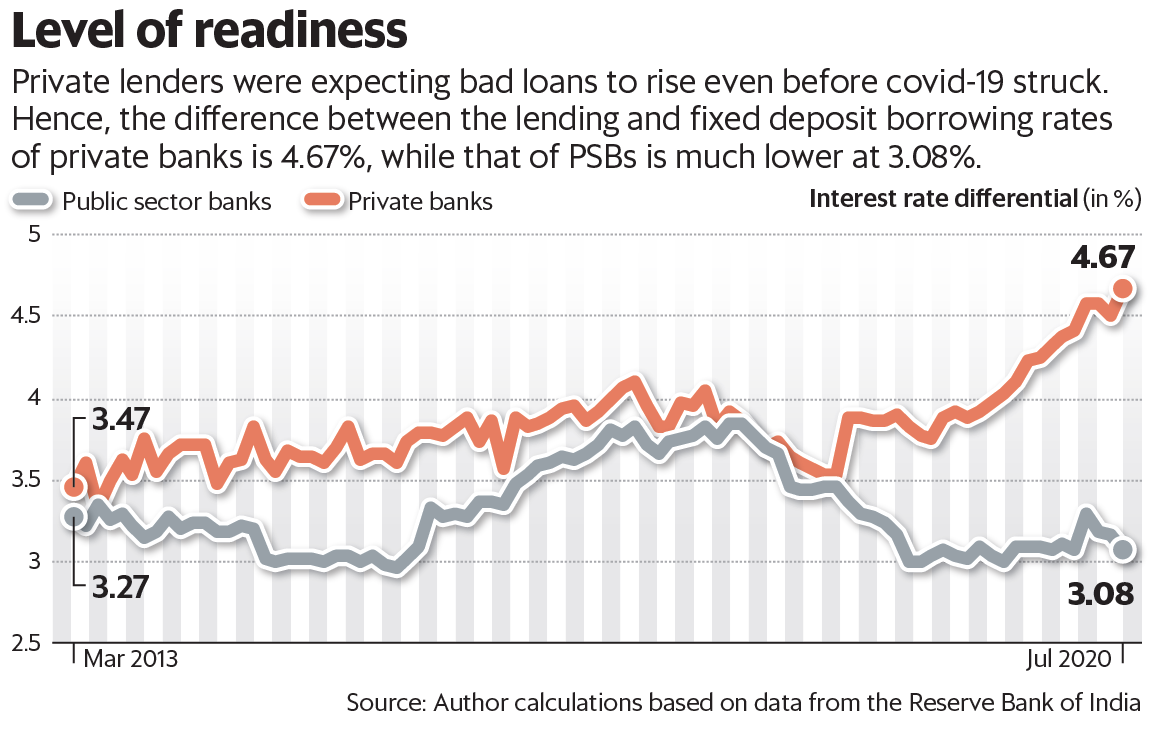 Interest rate data shows that private banks are better prepared to handle the post-covid loan defaults, which as things stand now, will start hitting the balance sheets of banks early next year. Meanwhile, state-led banks are trying to pump-prime the economy. Mint explains.

What does the interest rate data highlight?

Banks pay a certain rate of interest on their deposits, or borrowings, and charge a higher rate of interest on the loans that they give out. In the case of private banks, as of July 2020, the difference between the weighted average lending rate and the weighted average domestic term deposit rate is 4.67%, while that of public sector banks (PSBs) is much lower. To put it in simple terms, the difference between the lending rate and the fixed deposit borrowing rate of private banks in India, is at a more than 7-year high, while that of PSBs continues to lag. This is clear from the data from March 2013 to July 2020.

What is the case with public sector lenders?

The difference between the weighted average lending rate and the weighted average domestic term deposit rate in the case of public sector banks is at 3.08% and has barely moved since January 2019, when it was at 3%. In January 2019, the interest rate difference for private banks had stood at 3.82% and has since risen to 4.67%, with a bulk of the raise coming in the last one year. This clearly tells us that private banks were expecting bad loans to go up even before the pandemic struck, as India was entering an economic slowdown. Bad loans are loans that have not been repaid for 90 days or more.

What does a rising interest rate differential suggest?

By increasing the difference between lending rates and borrowing rates, private banks hope to boost profits. Increases in provisioning towards bad loans could then be adjusted against these higher profits. Provisioning is the process by which banks set aside a certain sum of money to adjust for losses they might face because of bad loans.

Why have PSBs been behaving differently?

When the economy slows down, PSBs are supposed to lend quickly, to mitigate the effects of the slowdown. Former RBI Governor Urjit Patel makes this point in his book Overdraft. “Government banks are encouraged to (over) lend to pump-prime the economy and boost preferred sectors,” he says. However, lending can grow at a fast pace only if the interest rates are low. This is the reason that the differential for PSBs between lending and borrowing interest rates has been almost flat since January 2019.

How does this put pvt banks  in  a  better  place?

Post pandemic, bad loans will start to hit banks only by early next year. Private banks are in a position to set aside more money as a proportion of their loans to meet the losses that may arise from these bad loans, while PSBs with a lower interest rate differential will not be able to set aside as much money as private banks for this purpose. However, there is not much cause for them to worry as the government will be ready to bail them out.

Vivek Kaul is the author of Bad Money.