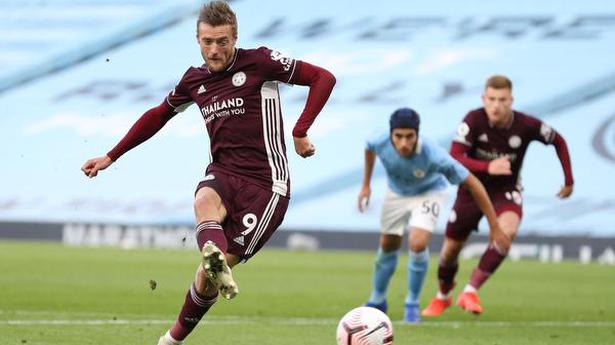 Pep Guardiola’s side was without a slew of key players including Sergio Aguero, Gabriel Jesus, Aymeric Laporte, Bernardo Silva and Ilkay Gundogan.

Jamie Vardy scored a hat trick containing two penalties as Leicester came from behind to stun hosts Manchester City in a wild 5-2 win and collect a third straight victory to open the Premier League season on Sunday.

City’s defense couldn’t handle the pace and movement of Vardy, who won two penalties — converting both of them — either side of a brilliant finish that saw him flick the ball home at the near post with a deft backheel.

Vardy added to the two goals he scored against West Bromwich Albion on the opening weekend as he looks to back up a 2019-20 season which he ended as the league’s top scorer with 23 goals.

James Maddison added a fourth for Leicester at Etihad Stadium by curling a shot into the top corner from 25 meters (yards) as City backed off the substitute, and Youri Tielemans converted a third penalty for his team in the 87th — by which time Vardy had been substituted.

Leicester became the first team to score three penalties in a single Premier League game, according to the league’s official statistics supplier, Opta.

“We tweaked it tactically today, knowing when we got the ball and played through their press we would get a few chances and we stuck them all away,” Vardy said.

“We have set up to infuriate them and it has worked a treat.”

Riyad Mahrez, a former Leicester player, gave City the lead in the fourth minute with an impressive strike and Nathan Ake pulled a goal back in the 84th for City, who lacked a presence up front with Sergio Aguero and Gabriel Jesus missing.

It was a concerning display by Pep Guardiola’s side, which was without a slew of other key players through injury and issues related to COVID-19, including Aymeric Laporte, Bernardo Silva and Ilkay Gundogan.

It came six days after City looked so assured in beating Wolverhampton 3-1 in its first match of the season, but Guardiola’s team was picked off repeatedly on Sunday.

“The problem was that we put extra pressure on ourselves to score the second or third one when they just didn’t want to play,” Guardiola said.

“They just wanted to defend and play on the counter-attack and in that position we have to be more calm. We started to think we are playing bad. We told them at halftime they were playing good, try to be patient and the rest will be in our hands, but we were not strong enough to be stable and patient.”

Rodgers said it was Leicester’s best display since he took charge in February 2019.

“It was a brilliant performance and result,” Leicester manager Brendan Rodgers said. “It has taken me 13 years to play that way. I’m very much about attacking and being aggressive. I always try to be positive but I need to think of other ways to get results in these games.”