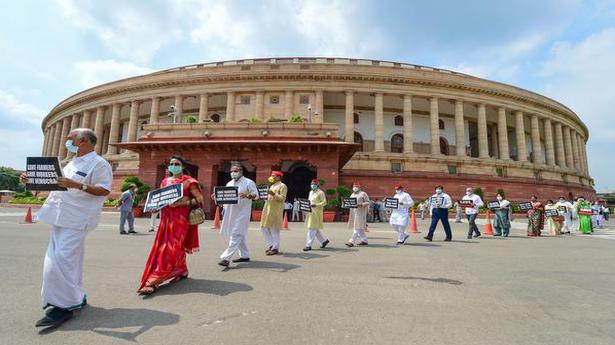 Opposition parties held three rounds of protests in Parliament on the last day of the monsoon session of Parliament, and the Leader of the Opposition in the Rajya Sabha Ghulam Nabi Azad met President Ram Nath Kovind, urging him to not give his assent to the three farm Bills passed in Parliament.

At noon, in a silent protest over 75 Rajya Sabha MPs belonging to the Congress, Trinamool Congress (TMC), Dravida Munnetra Kazhagam, Telangana Rashtra Samithi (TRS), Communist Party of India, Communist Party of India-Marxist, Rashtriya Janata Dal, Aam Aadmi Party, Samajwadi Party and the Nationalist Congress Party marched from the Gandhi statue to the Ambedkar statue, both few meters apart within the Parliament complex. A few hours later, another group of lawmakers from the TRS and TMC held a short dharna. In the evening, a set of Opposition MPs from the Lok Sabha took out a march.

On Wednesday, Parliament passed three Bills — the Industrial Relations Code, 2020; the Occupational Safety, Health and Working Conditions Code, 2020; and the Social Security Code, 2020 — while the Opposition continued its boycott that started on Tuesday over the passage of the three agriculture Bills.

Opposition parties made a last ditch attempt, writing a joint letter to the Vice President and Chairman of the Rajya Sabha Venkaiah Naidu. Naming the three labour Bills, the parties said that the Bills were passed in the absence of the Opposition parties. “These Bills affect the livelihood of crores of workers across the country. It will be a great blot on our democracy to have these Bills passed unilaterally today,” they said.

Opposition parties also had two rounds of meetings to chalk out a strategy to continue the campaign against the three farms Bills aimed at liberalising the agriculture sector. According to sources, the Opposition parties are exploring the possibility of holding an all-party meeting in the next few days. The parties also decided that each of them, at their levels, would hold campaigns in their respective States. The Congress is set to begin a month-long agitation from Thursday onwards.

The parties had sent a common memorandum to President Kovind, urging him to return the Bills, arguing that their passage in the Rajya Sabha was flawed. This petition was to be the basis of further legal action. Sources said that Opposition parties were divided over whether to move the Supreme Court on the subject.

After meeting with President Kovind, Mr. Azad told reporters that it was wrong to blame the Opposition for the pandemonium witnessed on Sunday in the Upper House. “We can’t be held responsible for what happened. The government is to be blamed. They should have gone with the consensus,” he said, referring to demands from 18 parties to not extend the time of the Rajya Sabha beyond 1 p.m.

Opposition parties’ floor leaders in the Rajya Sabha on Wednesday morning had decided to nominate Mr. Azad alone to meet the President. The President House had conveyed that only five leaders could meet him, owing to the physical distancing norms because of the COVID-19 pandemic.

The Opposition had moved five resolutions, two of which were asking to send the legislations — the Farmers’ Produce Trade and Commerce (Promotion and Facilitation) Bill, 2020; and the Farmers (Empowerment and Protection) Agreement on Price Assurance and Farm Services Bill, 2020 — to a Select Committee, and three other resolutions rejecting the Bills. But none of this was considered in the din.

“My colleagues were not allowed to move the resolution, they kept screaming for division [a vote]. That, too, was not allowed. In fact, none of us could understand what was happening, especially those who were sitting in the Lok Sabha chamber — they could not hear anything that was transpiring here,” Mr. Azad said.

All limits were crossed in the Rajya Sabha and the Constitution was undermined, he added. “I told him [President Kovind] that the Bills should return to Parliament, there should be voting on the resolutions moved by the Opposition,” he said.