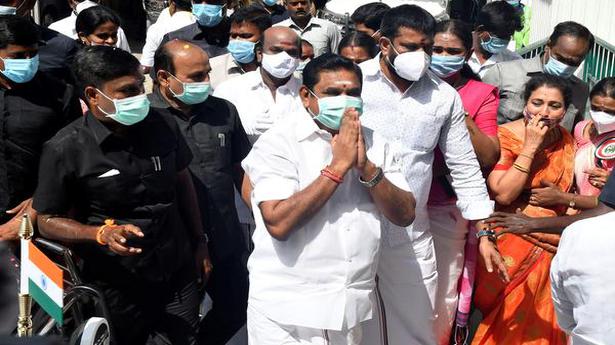 The sharp verbal duel came over differences on who should be the party’s chief minister candidate in the forthcoming 2021 Assembly election.

Also read: All eyes on AIADMK meet amid ‘Sasikala factor’

The executive committee meeting, which went on for over four hours at the party headquarters in Chennai, ended without a decision on the crucial issue.

“We will announce our [Chief Minister] candidate on October 7,” K.P. Munusamy, deputy coordinator of the party, told The Hindu after the meeting.

Exactly 10 days ago, senior functionaries of the party had met for over an hour and held an intense discussion on the subject.

According to several members of the executive committee, the deliberations at the meeting gave the impression that Mr. Palaniswami was “way ahead” of Mr. Panneerselvam and his nomination as the Chief Minister candidate looked a mere formality.

According to sources, during the meeting, the Chief Minister shot down the idea of constituting an 11-member steering committee as sought by Mr. Panneerselvam, saying such an arrangement would not be suitable to the AIADMK. The setting up of a steering committee was one of the issues agreed upon in August 2017, when the two factions of the party had merged.

Mr. Palaniswami recalled that Mr. Panneerselvam and 10 other MLAs had voted against his ministry in February 2017 during a trust motion, even though he [Mr Palaniswami] came from the ranks of the party. “Had we lost power then, what would have been the plight of our party,” the Chief Minister was quoted as having said.

The Deputy Chief Minister replied that there was nothing personal in his opposition to the Chief Minister. He had voted against Mr. Palaniswami as the latter was the nominee of V.K. Sasikala, former interim general secretary of the party and now serving a four-year prison term. Pointing out that he was then running “Dharma Yudham,” a campaign against the domination of Sasikala and her family in the affairs of the AIADMK, Mr. Panneerselvam said his group had merged with the Palaniswami camp subsequent to the latter freeing itself from the clutches of the Sasikala family.

The issue of a chief ministerial candidate was raised by K.A. Sengottaiyan, School Education Minister and a long-standing face of the party in the Erode district in the western belt, immediately after the executive adopted 15 resolutions. The Minister had urged that the issue be thrashed out immediately.

Mr. Sengottaiyan’s call was supported by several members, including Minister for Forests Dindigul C. Sreenivasan, veteran MP M. Thambi Durai, and Electricity Minister P. Thangamani. S. Semmalai, another veteran and considered a member of the Panneerselvam camp, pressed for the resolution of the issue and supported the demand for setting-up a steering committee.

Backing the demand, party veteran and MGR confidante Panruti S. Ramachandran, who attended a party event after a considerable gap, explained that such a steering committee would be akin to the polit bureau of the Communist Party of India (Marxist). Besides, this idea was approved by the party general council in September 2017, he said.

However, another veteran J.C.D. Prabhakar chided his colleagues for focusing on the issue of a chief minister candidate and not discussing matters covered in the resolutions. The AIADMK’s minorities wing secretary A. Anwhar Raajhaa suggested that if the size of the steering committee came in the way of its formation, it could be increased to accommodate several sections of society.

However, some ministers chose to play it safe and did not join the discussion.

P.H. Manoj Pandian, former Member of Parliament, said the two leaders were like “two leaves” [which is the symbol] of the party. C.Ve. Shanmugam, Law Minister, felt that the two leaders should sort out the issue between themselves.

As soon as the formal deliberations of the executive committee were over, Mr. Palaniswami, Mr. Panneerselvam, Mr. Munusamy, R. Vaithilingam, another deputy coordinator, and Mr. Thangamani had a brief closed-door meeting, after which Mr. Munusamy told the media that the party would name its CM nominee on October 7.

Asked whether the steering committee issue would be addressed then, Mr. Munusamy replied, “You will find it out in the announcement.” He asserted that notwithstanding the day’s discussion, the party would remain “united.”