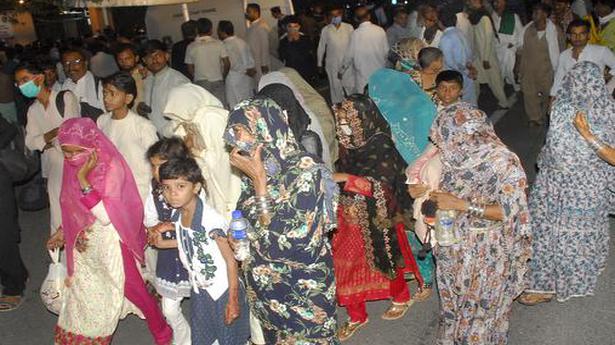 On August 9, 2020, 11 members of a family of Pakistani Hindu migrants were found dead in Rajasthan’s Lodta village in Jodhpur district

Pakistan’s minority Hindus rallied late on Thursday in Islamabad, briefly clashing with the police, to protest the deaths of 11 members of a Hindu migrant family who died in India last month under mysterious circumstances.

Since then, the dead migrants’ relatives have held small rallies in Pakistan’s southern Sindh province but this was the first time they had taken their demonstration to the country’s capital, vowing to stage a sit-in near the Indian Embassy.

According to Rajasthan Police, the recovery of a written note from a shack in Jodhpur district’s Lodta village, where 11 members of a family of Pakistani Hindu migrants were found dead, has suggested that one of the deceased, trained as a nurse, gave sedatives and injected everyone with poison, before taking her own life.

Preliminary investigation by the police found that the injections were given in a professional manner probably by a daughter of the head of the family, who also injected the poison through a cannula later in her leg. The absence of injury marks on the victims’ bodies ruled out the possibility of mass suicide. Read more from The Hindu’s Jaipur correspondent

The demonstrators arrived in Islamabad around midnight, chanting, “We want justice.” They briefly skirmished with officers who prevented them from reaching the embassy site.

Thursday’s rally was an unusual move for Pakistan’s Hindus, who have mostly lived without conflict with the country’s predominantly Muslim majority. Earlier this year under pressure from radical Muslims, Pakistani authorities halted construction of a Hindu temple in Islamabad.

Ramesh Kumar, a top leader of the Hindu community who led Thursday’s protest, met on Wednesday with Pakistan’s Foreign Minister, Shah Mahmood Qureshi, seeking his help in pressuring India to release results of the initial police probe into the case.

Pakistan has also asked for access to a Hindu worker who was at the Jodhpur farm at the time of the deaths, according to government officials.

In his meeting with Mr. Qureshi, Mr. Kumar said Shrimati Mukhi, the daughter of the head of the family that died, had levelled the poisoning accusations. She earlier this month told local media that India allegedly pressured the family to issue a statement denouncing Pakistan’s government. There was no official comment from India on the allegations.

Last week, Pakistan summoned an Indian diplomat to convey concerns over the “Jodhpur incident.” A subsequent ministry statement said India had “failed to share any substantive details regarding the cause and circumstances of the deaths” of the Hindus and asked for a comprehensive investigation.