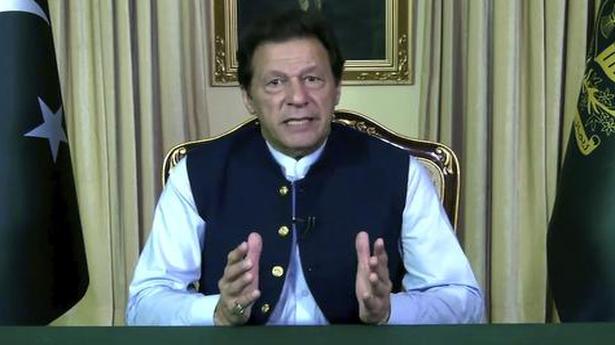 Imran Khan criticised India’s abrogation of Article 370 and the number of troops in the region.

Pakistan Prime Minister Imran Khan said there would be no durable peace in South Asia unless the Jammu and Kashmir dispute is resolved. In a 25-minute speech delivered virtually to the United Nations General Assembly (UNGA), Mr Khan focussed on India, its treatment of minorities and the Jammu and Kashmir dispute. He used fighting words to describe Pakistan’s position against any hypothetical Indian aggression.

“There will be no durable peace and stability in South Asia until the Jammu and Kashmir dispute is resolved on the basis of international legitimacy. Kashmir has been rightly described as a nuclear flashpoint,” Mr Khan said. “ The Security Council must prevent a disaster conflict and secure the implementation of its own resolutions, as it did in the case of East Timor,” he said.

“I want to make it clear that any attempt by the fascist, totalitarian, RSS led Indian Government to aggress against Pakistan will be met by a nation that will fight for its freedom to the end,” Mr Khan said.

Mr Khan criticised India’s abrogation of Article 370 and the number of troops in the region. He said the Indian government was trying to change the demographic of the state in order to “affect the outcome of a plebiscite envisaged in the U.N. Security Council resolutions.”

He touched on themes he spoke of last year including illicit financial flows out of developing countries, climate change and the rise of Islamophobia globally.

He said the Indian state was sponsoring Islamophobia due to RSS ideology.

“The RSS founding fathers were inspired by the Nazis and they adopted their concepts of racial purity and supremacy. While the Nazis’ hate was directed at the Jews, the RSS directs it towards the Muslims and to a lesser extent, the Christians. They believe that India is exclusively for Hindus and others are not equal citizens. The secularism of Gandhi and Nehru has been replaced by the dream of creating a Hindu rashtra…” Mr Khan said. He made reference to the fact that Muslims were killed in 2002 in Gujarat when Prime Minister Narendra Modi was the state’s Chief Minister.

Mr Khan said that Pakistan had showed “maximum restraint” despite India’s actions on the Line of Control (LoC) and that it had always called for a peaceful solution. The fact is, Pakistan has been known to, for decades, undermine peace in the Kashmir region through its sponsoring of cross-border terrorism in the area.

India’s UN Ambassador T.S. Tirumurti called Mr Khan’s speech a “another litany of vicious falsehood” and said India would respond during its ‘Right of Reply’ time.

“PM of Pakistan statement a new diplomatic low — at 75th UN General Assembly. Another litany of vicious falsehood, personal attacks, war mongering and obfuscation of Pakistan’s persecution of its own minorities & of its cross-border terrorism. Befitting Right of Reply awaits,” Mr Tirumurti wrote on Twitter.

A video showed Indian diplomat Mijito Vinito walking out of the General Assembly as Mr Khan’s speech was starting.

Prime Minister Narendra Modi is scheduled to address the UN at 0900 am New York time on Saturday.