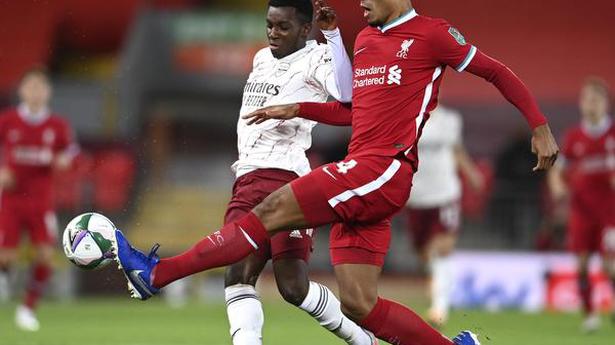 With the Premier League champions making several changes to the team that beat Arsenal in the league 3-1 on Monday and their opponents also rotating, it was always unlikely to be a high-class encounter.

Arsenal squeezed past Liverpool 5-4 on penalties to advance to the League Cup quarter-finals on Thursday after a goalless 90 minutes.

With the Premier League champions making several changes to the team that beat Arsenal in the league 3-1 on Monday and their opponents also rotating, it was always unlikely to be a high-class encounter.

Liverpool had the better chances and should have been awarded a 44th-minute penalty when Diogo Jota was brought down in the box.

The resulting free kick eventually led to Takumi Minimino finding space and smashing his close-range shot onto the crossbar.

Arsenal keeper Bernd Leno made two consecutive saves to stop Jota and Marko Grujic and the visitors responded with a chance of their own as Rob Holding’s header was punched away by Adrian in the 70th minute. The Gunners also appealed for a penalty in stoppage time when James Milner fell and handled the ball.

The referee Kevin Friend did not point to the spot and there is no VAR in the competition.

Arsenal, however, celebrated in shootout when Joe Willock’s spot kick crept under keeper Adrian to send them through.