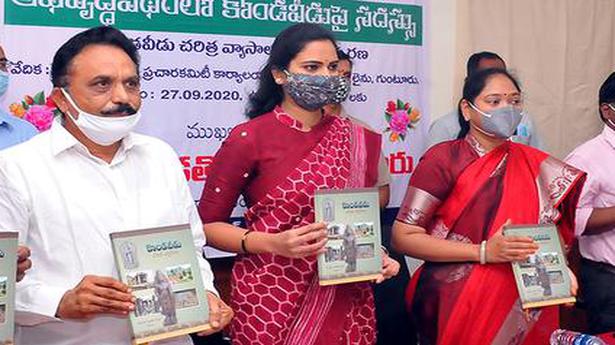 The historic Kondaveedu Fort is an enduring symbol of the valour and glory of the Reddy kings, Minister for Home and Disaster Management M. Sucharitha has said.

Speaking after launching a book titled ‘Kondaveeti Charitra Vyasalu’ authored by Modugula Ravikrishna at a function here on Sunday, Ms. Sucharitha said she had spent her entire childhood at at Phirangipuram, watching the fort and the formidable fort walls.

“In those days, it was very difficult to travel to Kondaveedu Fort due to lack of proper transport facilities. But now, we can just drive along the ghat road to reach the fort. The government is keen on transforming the fort as an important tourist destination,” said the Home Minister.

Participating in the programme, Guntur Collector I. Samuel Ananda Kumar said the Kondapalli Killa and Kondaveedu Fort were built by Reddy Kings during the 13th and 14th centuries. The Giri Durgam atop the fort used to be the most formidable protective formation in those days. The fort always boasted of its mighty warriors and horses.

“The Reddy kings patronised art and literature. Telugu was the official language. Yerrapragada was the court poet, while Srinatha was a minister of the Reddy kings,” he said.

Kondaveedu Fort Development Society secretary Kalli Siva Reddy said that a road from Ameenabad to the fort has been sanctioned, which will help tourists drive to the fort from the state highway before entering Phirangipuram village.