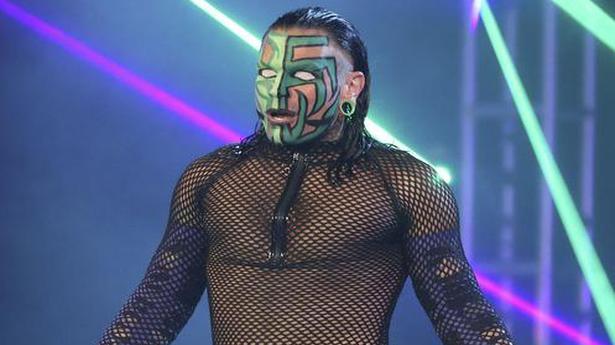 Jeff Hardy loves taking risks. “I have always liked the idea of screwing up and then fixing it up,” says the wrestler, over a Zoom call from Orlando in the US.

When he and his brother Matt started out as teenagers, bravely taking on Superstars like Razor Ramon and King Kong Bundy, they took many a beating. But, they shouldered on, desperate for recognition. Over time, the Hardy Boyz, as they called themselves, became full-time competitors. Jeff went on to win major wrestling titles like Intercontinental on multiple occasions, in addition to others. In a one-on-one interaction, Jeff, who is nicknamed ‘The Charimastic Enigma’, tells MetroPlus about his journey and the new normal. Excerpts:

How has life changed in the past few months, post the Covid-19 pandemic?

I had undergone a knee surgery, and was supposed to return to wrestling in front of 20,000 people in Detriot. But things changed so much that I made a comeback with no one watching me. It was complete silence. Since then, I have wrestled in two other towns. The situation has also led us to the WWE ThunderDome (a state-of-the-art set and video boards for an immersive atmosphere), which is very futuristic. I’m just blessed to be part of the WWE and still be able to perform. Creatively, I have been on a roll too, and have also been a dad, husband and a son to the best of my abilities.

Where do you see wrestling going in the future, since it is a contact sport?

I have no idea, man. I had my heart set on Wrestle Mania that was to take place in Hollywood, California, in 2021, and I thought that could be my year for a cool, big match. But in a way, all this is exciting because everyone has to adapt.

Some sports like cricket have started taking to bio-bubbles and social distancing whenever possible. Is that possible in wrestling?

Ours is a contact sport. We sweat on each other and we get extremely close. I have no solution, but I just want to enjoy each and every match I have going forward. This is going to be my last run, and I want it to be a good, long successful one.

As teenagers, what drew you and your brother Matt to the world of wrestling?

We saw Macho Man the Randy Savage, and we kind of fell in love with it [wrestling]. We got a trampoline for Christmas one year, started doing our own shows on Sundays, and became part of the Trampoline Wrestling Federation. Then, we bought our own ring, and started performing in local county fairs. We got into WWE when I was 16… we were the nobodys against the Superstars. We kept getting our butts kicked real hard.

What did repeated failures teach you, and how did you remain strong?

I have always liked the idea of screwing up and then fixing it up to the best of your abilities. Even in wrestling, I don’t know how I survived my 20s without getting seriously hurt. We were the smaller guys who got kicked by the bigger ones, and people sort of respected that. The energy that the WWE universe provided me when it’s packed with people… it’s unlike anything else.

Your memories on winning the first title at WWE Armageddon 2008…

Oh boy, that was a childhood dream come true. I did it on my own since my brother and I had gone on different ways then. That was my ultimate success, and that tells me that the reason I was born was to become a wrestler.

What do you do when you are not wrestling?

I have a huge motocross track back home, and maintaining it is a lot of work. There’s a lot of working on music; I’m planning to release six songs soon. I love indulging in motorcycles, painting, drawing and music.

Many WWE stars have taken to acting in films as well. Do you have any such plans?

I’ve got too many tattoos to be a full-time Dwayne Johnson-type of actor (smiles). But, I have always wanted to do one good movie. I’m all about acting and storytelling, and I’m up for it.

Watch Jeff Hardy in action every Saturday Live on WWE SmackDown from 5.30 am (IST), and tune in to his Birth of a Champion on September 28, 8 pm, on SONY TEN 1 & SONY TEN 3