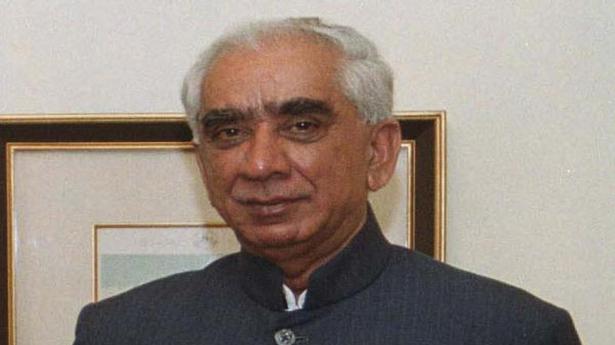 Cabinet Minister under Vajpayee and MP for over two decades, his political career saw controversy and a bitter partying with the BJP

Former Union minister Jaswant Singh passed away on Sunday morning after a long illness at the Army’s Research and Referral Hospital in New Delhi. He was 82. He is survived by his wife and two sons, including former Barmer MP Manvendra Singh.

Hospital officials said he had been admitted on June 25 and was being treated for sepsis and multi-organ dysfunction syndrome and effects of severe head injury sustained earlier. He suffered a cardiac arrest this morning.

A veteran leader who held the positions of finance, defence and external affairs minister in the Union governments headed by Atal Behari Vajpayee, Mr. Singh’s career was storied and eventful, reflecting much of India’s strategic turns in the 1990s and early 2000s.

Prime Minister Narendra Modi condoled the death of the former Union minister, tweeting: “Jaswant Singhji served our nation diligently, first as a soldier and later during his long association with politics. During Atalji’s Government, he handled crucial portfolios and left a strong mark in the worlds of finance, defence and external affairs. Saddened by his demise.”

Suave and well versed in language and diplomatese, he soon found a place as the BJP’s go-to man for strategic affairs as well as finance, while also serving for a spell as deputy chairperson of the Planning Commission. He was also the Leader of the Opposition in the Rajya Sabha between 2004-2009.

Mr Singh, who was a close personal friend of former prime minister Vajpayee and deputy prime minister L.K. Advani, was seen as not being an RSS man, and the organisation is said ensured that his name did not figure as finance minister in the first Vajpayee government.

He was nevertheless entrusted with many sensitive assignments on behalf of the NDA government, including negotiating with the United States for the easing of sanctions when India tested a nuclear device at Pokhran in 1998, which U.S. representative Strobe Talbot has written about in his book Engaging India: Democracy, Diplomacy and the Bomb.

His career, however, was also marred by controversy; first when he was in government during the 1999 Kandahar hijacking. Mr Singh had escorted three terrorists — Ahmed Omar Saeed Sheikh, Masood Azhar and Mushtaq Ahmad Zargar — to Kandahar in exchange for the 175 passengers of the hijacked flight IC 814 who were being held hostage by Pakistan-backed terrorists.

While that controversy created a lasting debate on how to deal with such situations in the future and beefing up security at Indian airports, Mr Singh was caught in another row when the BJP lost the elections in 2009. In a letter to senior party leaders just before they met in Shimla for a review, he demanded a serious enquiry into the causes of the defeat. This caused panic in the party’s ranks. Later, Mr. Singh’s book on Pakistan’s founder Mohammad Ali Jinnah, Jinnah: India, Partitiion, Independence was considered sympathetic to the late leader and led to his expulsion from the party.

Despite being elected to the Lok Sabha in 2009 from Darjeeling, he remained on the sidelines for a while till he was brought back into the party by then president Nitin Gadkari. In 2014, however, his desire to contest Lok Sabha elections on a BJP ticket from Barmer was thwarted and he fought as a rebel candidate against the party’s candidate Sona Ram Choudhary. He was defeated and this led to a bitter parting from the BJP.

In August 2014, he suffered a fall at his home in Delhi and had been in poor health since. Prime Minister Modi visited the ailing leader and a half-way house of goodwill emerged. On Sunday morning, Mr. Singh breathed his last.