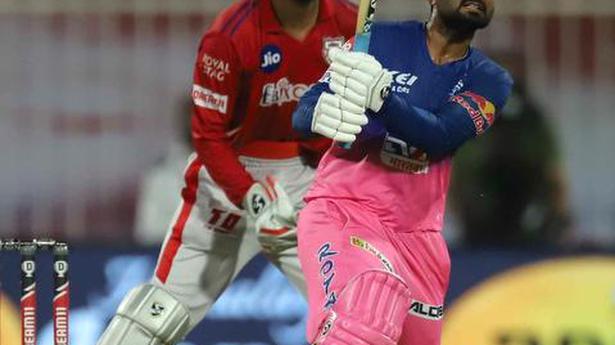 The Rajasthan Royals all-rounder played one of the most freakish T20 innings after an awful start to help his team achieve the record of the highest successful chase in IPL history.

That’s the ball-by-ball progression of Rahul Tewatia’s prediction-defying knock for Rajasthan Royals against Kings XI Punjab on Sunday night at Sharjah. The leg-spinner from Haryana was promoted to No.4 much to everyone’s surprise, ahead of more experienced players, as Rajasthan Royals was set to chase a massive 224. One freakish over, in which he belted five sixes, not only changed the whole complexion of the chase, it also helped Royals achieve the record for the highest successful chase in IPL history.

The left-hander’s biggest dilemma for the better part of his 31-ball knock was getting bat on ball, let alone clear the boundary, as the required run-rate climbed. Commentators were quick to pounce on the Royals for their seemingly baffling strategy of sending an untested Tewatia ahead of Robin Uthappa, and with every dot ball, the pressure mounted on Sanju Samson, in the form of his life at the other end.

At one stage, Tewatia was 5 off 10 balls, which became 5 off 13, then 7 off 16, a desperate heave down the ground made it a slightly more respectable 14 of 21 balls and then 17 off 23 balls. Tewatia’s approach of playing from the crease against spin wasn’t working, nor was he willing to charge down the pitch and risk losing his wicket.

The express pace of West Indies left-armer Sheldon Cottrell in the 18th over gave Tewatia the ammunition he needed as he struck him for two huge sixes, one of which (thanks to some alert camera work), bounced off the roof of the stadium and disappeared into the main road. Using the pace, Tewatia stayed at the crease and swung three more sixes to make it 30 off the over and his score 47 off 29.

Tewatia recorded his seventh and final six the following over off Mohammed Shami and had all but finished the game when he was caught at the boundary going for the eighth. An innings that dragged its feet to 17 off 23 balls ended with 53 off 31, forcing the commentary panel to eat its words and cricket fans to sheepishly review their tweets.

Born in 1993, Tewatia made his first-class debut in 2013 and he has played 7 games to date. However, he has appeared more in limited-overs games for Haryana, with a highest score of 91.

His IPL career began in 2014 with the Royals but he had a quiet season, playing just three games. In 2017, he was bought by Kings XI Punjab though he didn’t get an extended run there as well, playing three games. Delhi Daredevils bought him in 2018 and he managed to get a more regular gig, playing eight games that season. In 2019, ahead of the main auction, he was traded off to the Royals, his first team.

A look at Tewatia’s domestic figures show that he has a T20 strike-rate of 153 runs per 100 balls, in 49 games. That may have clinched his promotion, and speaking after his breath-taking knock on Sunday, he said the early part of his innings was the worst 20 balls he has ever played. He added his team-mates knew he could hit the ball long, something many viewers apparently didn’t know. Like playing a PC-game, he unlocked the “cheat code” just in time, and the rest is history.