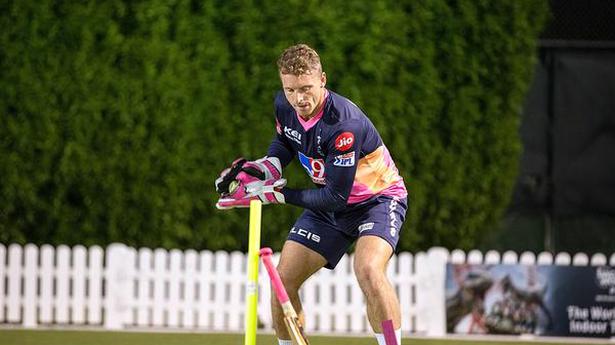 The wicket keeper-batsman expects a tough match against Kings XI.

A fortnight ago, Stuart Broad called Jos Buttler England’s greatest-ever white-ball cricketer. The Rajasthan Royals management must have been pleased to hear that.

The wicket-keeper batsman had an exceptional season for Royals at the last IPL, though he had to leave the tournament at the half-way stage. He could be playing more matches this time around, though he had missed the first match against Chennai Super Kings, since he was quarantined.

He is available for Sunday’s fixture against Kings XI Punjab. “(It was great to) get a win on the board; the team played fantastically well in the first game,” said Buttler. “It was an outstanding batting performance and a fantastic bowling performance in tough bowling conditions.”

He said he was excited to play his first game. “It was great to be back in training with the boys,” he said. “There’s a great vibe around the team so I’m really looking forward to taking the field.”

He said the atmosphere and energy around the squad was fantastic. “We are expecting a really tough match against Kings XI,” he said. “(It is) a fantastic team. K.L. Rahul was in exceptional form the other night against RCB, so he will be a key wicket as always.

“I think we’ll see another potentially high-scoring game at Sharjah with small boundaries and the dew factor coming in.”