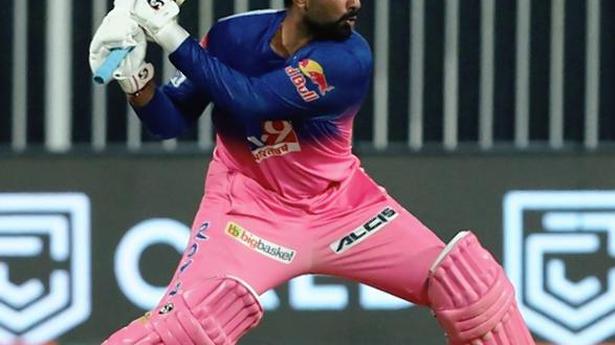 He had told his captain Steve Smith that he would hit three sixes off Sheldon Cottrell. He hit five in fact, all in one over.

That stunning onslaught on the West Indies left-arm pacer turned Sunday night’s IPL match on its head. Tewatia’s 53 (31b, 7×6) powered Rajasthan Royals to a historic, four-wicket win over Kings XI Punjab at Sharjah.

The 27-year-old from Haryana may have taken the world by shock, but not his teammates. “We have seen in the nets what we saw in the Cottrell over,” said Smith.

“We had a competition to determine who would hit most sixes in an over and Tewatia hit four or five,” said Sanju Samson, whose 42-ball 85 set up Royals’ audacious chase.

When Samson fell at the start of the 17th over, it had looked virtually curtains for Royals, whose fans would have rather preferred to see the back of Tewatia.

Then, Tewatia took a liking to Cottrell. “Credit to him,” said Smith. “He did a terrific job in the end.”

Tewatia said Samson had pepped him up during their third-wicket stand. “He told me that if I managed to hit one six, I will hit more,” he said.

The day after, Royals posted a three-year old tweet by Tewatia that made interesting reading. “Keep the faith,” Tewatia had tweeted.

“The most amazing things in life tend to happen right at the moment you’re about to give up hope.”