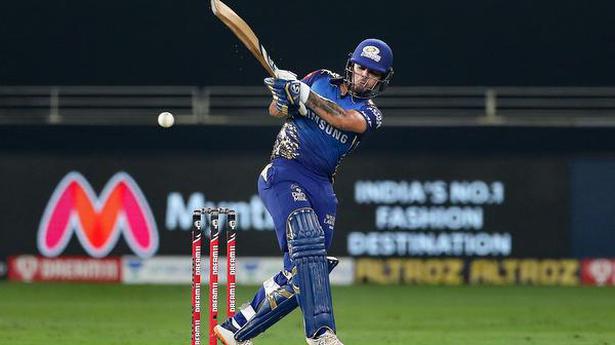 After Rohit, Pollard and Hardik power the side to 191 for four, the bowlers help the defending champion complete a 48-run win in Abu Dhabi.

And then the MI bowling unit came to the party to ensure Rohit’s big moment ended with a comprehensive win for the defending champion.

After being asked to bat at the Sheikh Zayed Stadium in Abu Dhabi, Rohit started the innings two runs shy of becoming only the third batsman to tally 5,000 IPL runs. Not only did he cross it with an uppish drive off Mohammed Shami, he went from strength to strength.

Once Jasprit Bumrah breached Mayank Agarwal’s drive with his fierce pace in the Powerplay, Kings XI’s middle-order was exposed early.

When canny leggie Rahul Chahar forced K.L. Rahul into a mistake — he was bowled after an attempted paddle-sweep went wrong — the fizz was all but taken out of the chase.

Nicholas Pooran’s cameo did keep Kings XI’s hopes alive but James Pattinson’s variation of pace resulted in Pooran nicking one behind the stumps.

Eventually, Kings XI could only trudge along to 143 for eight, handing MI a comfortable 48-run win.

Despite Rohit looking in good touch, early setbacks meant the MI captain had to bide his time. When Pollard walked in at 83 for three in the 14th over, the stage was set for Rohit and Pollard to cut loose.

Rohit started the leather-hunt by plundering twin fours and successive sixes off all-rounder James Neesham in the 16th over.

Rohit was brilliantly caught on the straight boundary off the first ball of the 17th over, with an off-balance Glenn Maxwell pouching the ball inches inside the rope at long-off and relaying it to Neesham before crossing the boundary.

Pollard and Hardik continued to hammer Kings XI, which miscalculated its bowling changes.

As if Neesham bowling the 16th and 18th overs wasn’t surprising enough, K. Gowtham was asked to bowl the last over. Hardik and Pollard made merry by tonking four sixes off it. The target was too steep for Rahul’s men.