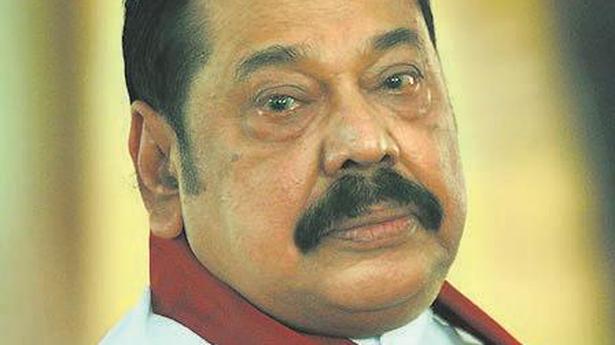 While outlining the talking points, the Sri Lankan Prime Minister’s statement made no mention of justice and post-war reconciliation.

Hours after India and Sri Lanka issued a joint statement referring to Prime Minister Narendra Modi’s call to the Sri Lankan government to address the Tamil minority’s aspirations, with the implementation of the 13th Amendment, Prime Minister Mahinda Rajapaksa’s office released a statement on Saturday, making no mention of Mr. Modi’s call, or the constitutional provision on power devolution.

Mr. Rajapaksa’s statement, following the leaders’ virtual meet on Saturday, focused on Sri Lanka’s response to the coronavirus pandemic that has drawn international praise. While outlining the talking points of their discussion — such as development, geopolitics, economy, defense and tourism —it was silent on justice and post-war reconciliation that remain sensitive issues to some in the southern Sinhala-Buddhist constituency, who fear power devolution might lead to separatism and justice might target the armed forces, who are accused of war crimes.

Though PM Rajapaksa, during his time as President for a decade from 2005, had assured India and the international community on multiple occasions that he would “go beyond” the 13th Amendment to ensure “meaningful devolution’, as a means of arriving at a political solution to Sri Lanka’s national question, he is yet to implement the promise. Saturday’s joint statement sparked interest for its explicit reference to the 13th Amendment, that too at a time when some in the Rajapaksa administration are calling for its abolition.

While the joint statement indicated that both Colombo and New Delhi were agreeable to the mention, the omission in PM Rajapaksa’s own statement that came hours later did not go unnoticed. Popular weekend newspaper Sunday Times carried a front page report titled ‘Lanka avoids any 13-A commitment at Rajapaksa-Modi summit’.

Meanwhile, the Tamil National Alliance (TNA), a prominent grouping of Tamil parties, welcomed the joint statement by India and Sri Lanka. Tweeting from its official handle, the TNA said: “We welcome PM Modi calling on Sri Lanka to address the aspirations of the Tamil people for equality, justice, peace and respect within a united SL including by carrying forward the process of reconciliation with implementation of constitutional provisions.”