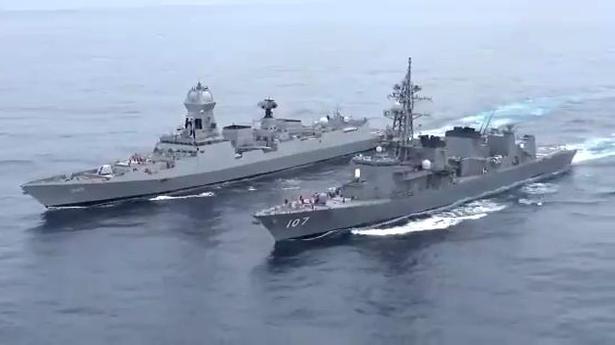 The 4th edition of the biennial India and Japan naval exercise JIMEX-20 is under way in the North Arabian Sea, the Navy said. This is the first exercise following the conclusion of the mutual logistics support agreement early this month.

The maritime cooperation has significantly increased between the two sides with focus on information sharing and Maritime Domain Awareness (MDA) in the Indian Ocean Region (IOR) and Indo-Pacific.

“JIMEX-20 will showcase high degree of inter-operability and joint operational skills through conduct of a multitude of advanced exercises, across the spectrum of maritime operations,” the Navy said in a statement. Multi-faceted tactical exercises involving weapon firings, cross-deck helicopter operations and complex surface, anti-submarine and air warfare drills will consolidate coordination developed by the two navies, it said.

Stating that the naval cooperation has increased in scope and complexity over the years, the Navy said advanced level of operations and exercises planned during JIMEX-20 are indicative of “the continued upswing in Indo-Japanese defence relations and continued efforts by both governments to work closely for a more secure, open and inclusive global commons, in accordance with international regulations.”

The three-day war games which began on Saturday are being conducted in a “non-contact at-sea-only format”, in view of the COVID-19 restrictions.

The two countries have made steady progress in MDA based on the implementing arrangement for deeper cooperation signed between the two navies. There has been a sharp increase in India’s maritime interactions with the Quad countries on a bilateral basis centred around information sharing for improved MDA. The Andaman and Nicobar islands located close to the strategic Strait of Malacca have been of interest to several countries including Australia and Japan.