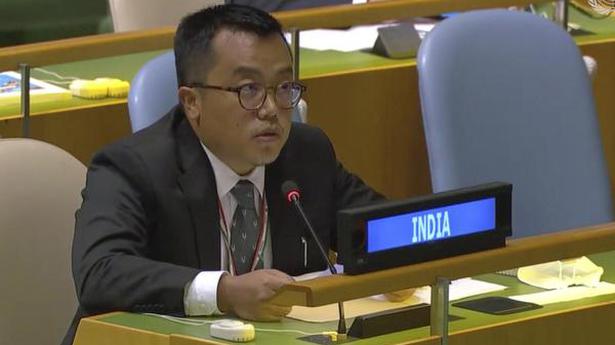 Mr. Vinito had left the General Assembly hall as Mr. Khan’s video address began, as a gesture of India’s protestations against it.

The response said Mr. Khan had “no reasonable suggestion to offer the world” and his speech was about “lies, misinformation, war mongering and malice.”

“The words used today at this great Assembly by the leader of Pakistan demean the very essence of the United Nations. For a nation that is deeply buried in medievalism, it is understandable that the tenets of a modern civilized society such as peace, dialogue and diplomacy are farfetched,” Mr. Vinito said.

Mr. Khan, in his speech earlier on Friday, had talked about India’s treatment of its minorities, legislative changes to Jammu & Kashmir, Indian troop presence there etc. He had also warned of Kashmir being a nuclear flashpoint and said there would be no peace in South Asia until the Kashmir dispute was resolved on the basis of “international legitimacy.”

Mr. Vinito had left the General Assembly hall as Mr. Khan’s video address began, as a gesture of India’s protestations against it. “Let me assert here loud and clear. The Union Territory of Jammu and Kashmir is an integral and inalienable part of India. The rules and legislations brought in the Union Territory of Jammu & Kashmir are strictly internal affairs of India,” Mr. Vinito said in India’s reply address.

“The only dispute left in Kashmir relates to that part of Kashmir that is still under illegal occupation of Pakistan. We call upon Pakistan to vacate all those areas that it is in illegal occupation of.” [In September 2019, External Affairs Minister S. Jaishankar had said that India expects to have physical jurisdiction over PoK].

“This is the country that has systematically cleansed its minorities including Hindus, Christians, Sikhs and others, through the abuse of its blasphemy laws and through forced religious conversions,” Mr. Vinito said.

During his speech Mr. Khan had talked about Islamophobia around the world, but also made a specific reference to India having state-sponsored Islamophobia.“For someone who professes to be a champion of Islam, this is also a country that has encouraged killing of fellow Muslims merely because they belonged to a different sect, or to a different region in Pakistan, and through sponsoring terrorist attacks against its neighbours,” Mr. Vinito said.

“The only way for Pakistan to become a normal country is to abjure its moral, financial and material support to terrorism, turn its attention to the problems faced by its own population including its minorities and stop misusing U.N. platforms to further its nefarious agenda,” he said.