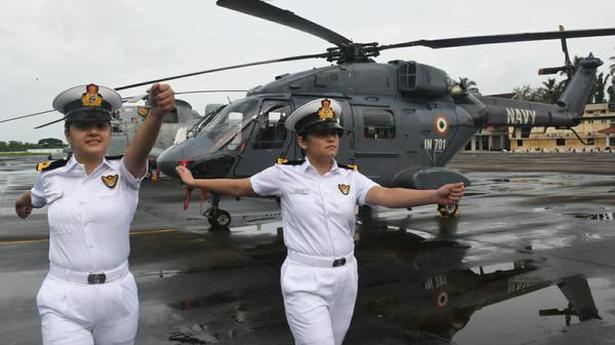 This is a landmark event as it paves way for women being posted on board Indian warships in the near future, the Navy said.

Sub Lt. Kumudini Tyagi and Sub Lt. Riti Singh would be the first women airborne tacticians in India who will operate from the deck of warships.

They passed out of Indian Navy’s Observer Course, at Southern Naval Command, Kochi on Monday. They will operate helicopters onboard the ships, an area where male officers reigned. Both are engineering graduates in computer science and were commissioned into the Navy in 2018.

Sub Lt. Singh, who hails from Hyderabad is the third generation from her family to serve in the armed forces. Her grandfather was in the Army and her father in the Navy. “It was my dream to adorn the white uniform,” she said.

For Sub Lt. Tyagi, who hails from Ghaziabad, the Navy was all about the water, till she joined the force. “I was motivated to join the naval aviation wing, on hearing about the death of woman officer Lt. Kiran Shekhawat in 2015 in an accident involving a Naval aircraft. Navy personnel work on the land, air and water that was a challenge I wanted to take up,” she said.

For the first time in the history of Naval aviation in India, women officers would be joining helicopter exercises and would subsequently be operating from decks of warship. This is a landmark event as it paves way for women being posted on board Indian warships in the near future, the Navy informed.