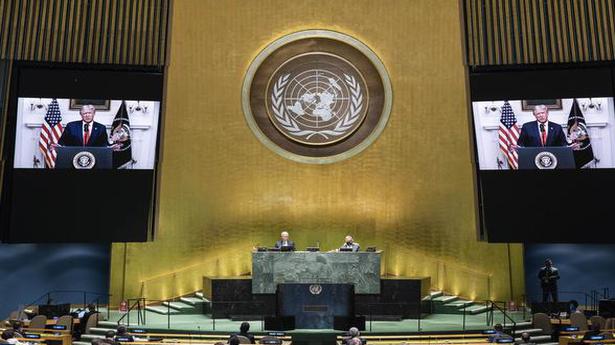 “We will distribute a vaccine, we will defeat the virus, we will end the pandemic,” Mr Trump said.

Delivering a campaign style speech to the United Nations General Assembly’s (UNGA) 75th session, U.S. President Donald Trump said China must be held responsible for the COVID-19 pandemic. Mr. Trump also used his video message at the general debate to talk up the U.S.’s work to address the pandemic, his economic record and trade deals.

“We will distribute a vaccine, we will defeat the virus, we will end the pandemic,” Mr Trump said.

“We must hold accountable the nation which unleashed this plague onto the world: China,” Mr Trump said. “In the earliest days of the virus, China locked down travel domestically, while allowing flights to leave China, and in fact the world.” (As per factcheck.org , this is a misleading claim and China did block flights out of Wuhan on January 23).

Mr Trump alleged that America was being treated unfairly on its environmental record and called the Paris Climate Accord “one-sided”. The Trump administration had withdrawn the U.S. from the accord.

“Those who attack America’s exceptional environmental record while ignoring China’s rapid pollution, they are not interested in the environment,” Mr Trump said. “They only want to punish America. And I will not stand for it.”

Mr Trump said if the U.N. wanted to be an effective organization it would need to focus on the “real problems” of the world which he listed as including, “terrorism, the oppression of women, forced labour, drug trafficking, human and sex trafficking, religious persecution and the ethnic cleansing of religious minorities.”

Mr Trump — who faces an election in November — said that in three years he had built the “greatest economy in history.” The president talked about a peace deal he had facilitated between Serbia and Kosovo and a deal between Israel , UAE and Bahrain to strengthen ties ( the “Abraham Accords” signed last week at the White House).

“We took an approach, and the approach worked. We intend to deliver more peace agreements shortly,” Mr Trump said.

Mr Trump, said he was putting his country first and urged others to do so. He also implied he would be continuing as president next year.

“As President, I have rejected the failed approaches of the past, and I am proudly putting America first, just as you should be putting your countries first. That’s okay. That’s what you should be doing. I am supremely confident that next year, when we gather in person, we will be in the midst of one of the greatest years in our history. And frankly, hopefully, in the history of the world,” Mr Trump said.