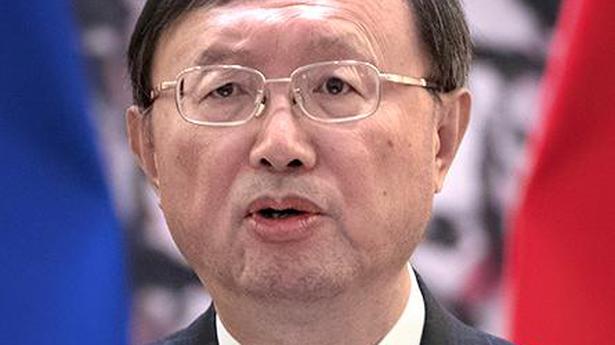 In what is said to be the first outbound visit by top Chinese officials to South Asia since the outbreak of COVID-19, a senior Chinese delegation will meet Sri Lankan President Gotabaya Rajapaksa and Prime Minister Mahinda Rajapaksa in Colombo on Friday.

A “high-powered Chinese delegation”, led by senior Chinese leader and top foreign policy official Yang Jiechi, who is a member of the Communist Party of China’s Politburo and the director of the Central Committee’s Foreign Affairs Commission, the top policy-making body, will arrive in Colombo on Thursday night, the Foreign Ministry in Colombo said in a statement.

“Being the first ever Chinese visit in the South Asian region since the global coronavirus epidemic, the visit is expected to strengthen cooperation between Sri Lanka and China, in the areas of combating the global pandemic and revival of economic relations,” the statement said.

Sri Lanka will be Mr. Yang’s first stop on a four-nation tour, which will also see him visit the UAE, Algeria and Serbia, the Chinese Foreign Ministry said, adding he was invited by the governments of the four countries.

The visit takes place against the backdrop of worsening India-China relations and rising U.S.-China tensions, and a push by Beijing following the pandemic to deepen its economic ties in the neighbourhood, including through cooperation to battle the impact of COVID-19, a move that is being closely followed in both New Delhi and Washington.

The Chinese delegation’s meeting with Sri Lanka’s two most powerful leaders comes a fortnight after the virtual summit between Prime Ministers Narendra Modi and Mahinda Rajapaksa. It also comes days after the ‘Quad’ meeting in Tokyo, where U.S. Secretary of State Mike Pompeo referred to “regional tensions” between India and China.

New Delhi, in the bilateral summit, promised Colombo a $15-million grant for the promotion of Buddhist cultural exchanges. However, there was no final word on Colombo’s request for a debt freeze and an additional $1.1-billion currency swap facility — RBI signed one for $400 million in July — that President Gotabaya and PM Mahinda have sought from New Delhi. In March this year, Sri Lanka and China signed a “facility agreement” for a $500 million loan, on Colombo’s request. In Friday’s meetings, the two sides will likely discuss strengthening economic cooperation, specifically looking at ongoing Chinese-backed projects such as the $1.4 billion port city coming up on over 650 acres of reclaimed land by the seafront in Colombo.

Mr. Yang arrives in the midst of an unusual China-U.S. spat playing out in Sri Lanka. In a statement on October 5, the Chinese Embassy in Colombo slammed the U.S. for “naked hegemony, supremacy and power politics” after the American Ambassador in Colombo, Alaina Teplitz, in an interview with local media, criticised Chinese projects in Sri Lanka.

“The U.S. believes that partnerships between countries should be open, transparent, and mutually beneficial — and if this is what Sri Lanka’s relationship with China embodies, then we encourage it,” she said, adding that “a 2019 World Bank study concluded that more than 60% of China-funded Belt and Road Initiative (BRI) projects are allocated to Chinese companies and stressed that tender processes are opaque.”

The Chinese Embassy responded strongly, saying the interview “severely violated the diplomatic protocol”. “While it’s always not surprising to see the U.S. interfered into a sovereign country’s internal affairs, the general public is still astonished to witness its despicable attempt to manipulate others’ diplomatic relations,” the statement said, adding it “strongly suggest[s] the U.S. quit the addiction of preaching others and applying double standards”.

Chinese analysts have welcomed the return of the Rajapaksas to the helm, with PM Rajapaksa’s stint at President marking a rapid deepening in strategic and economic ties. Last month, both countries marked the six-year anniversary of the Colombo Port City project, which had been launched by Mr. Rajapaksa and President Xi Jinping in September 2014 as a flagship project in China’s Belt and Road Initiative.

Marking the anniversary, China’s official Xinhua news agency said last month the project “has powered through a turbulent six-year period, overcoming numerous challenges, including the Easter bombings in April 2019 hitting three luxury hotels near the project and affecting the country’s tourism, as well as the COVID-19 pandemic impacting the country less than a year later.”

According to officials at the Ministry of Foreign Relations in Colombo, a special “travel bubble” set up for the purpose of the Chinese delegation’s visit will confine its members to Colombo, and restrict their engagements to just two meetings with the Head of State and the Prime Minister, under the “strict health protocol” prescribed by the Ministry of Health.

“The delegation will undergo a pre-departure PCR test before arriving here,” an official told The Hindu, even as some Sri Lankan netizens questioned the protocols in place, since the high-level meetings are scheduled the day after the delegation arrives.

Though Sri Lanka is facing a new wave of COVID-19, following a recent outbreak in a garment factory just outside Colombo, the country has drawn international praise, including from the World Health Organization, for successfully containing the spread of the virus in the last few months, due to the concerted efforts of the public health workers, with the support of the army.

After Sri Lanka detected its first local case of COVID-19 in March this year — a visiting Chinese tourist tested positive in January — health authorities have recorded 4,459 cases, 13 deaths and 3,278 recoveries so far. In addition to closing airports, except for select repatriation flights, the Foreign Relations Ministry had also issued a note to all missions, outlining the protocol for resident diplomats and UN representatives returning to the island nation after travel abroad. The requirements, in addition to a pre-departure PCR test, or one on arrival, include self-quarantine for 14 days.