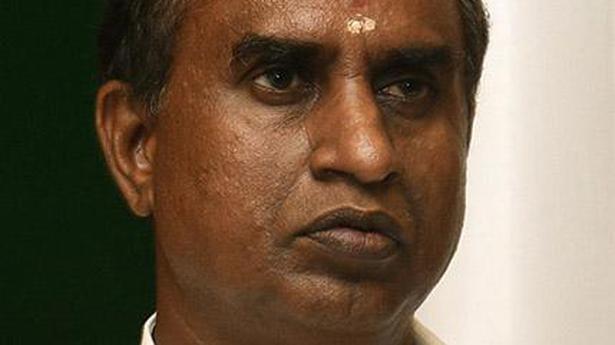 Allegations pertain to ‘irregularities in award of civil works to private firms’.

The Madras High Court is mulling over the possibility of ordering a fresh preliminary inquiry by an “independent agency” into allegations of largescale irregularities by Municipal Administration and Rural Development Minister S.P. Velumani in award of several civil work contracts to private firms by the Greater Chennai and Coimbatore municipal corporations.

Justices M.M. Sundresh and R. Hemalatha said they might order a fresh probe by an independent agency if they were not satisfied with the preliminary inquiry conducted by the Directorate of Vigilance and Anti-Corruption (DVAC), which had filed an elaborate report, running to hundreds of pages, finding no material to proceed against the Minister.

The judges asked advocates V. Suresh and E. Raj Thilak, representing the complainants Jayaram Venkatesan of NGO Arappor Iyakkam and DMK MP R.S. Bharathi respectively, to make their submissions on the possibility of transferring the same complaints, which they had lodged with the DVAC in 2018, to the “independent agency” for a fresh preliminary probe.

The Bench also asked the lawyers to enlighten the court on Monday as to whether the independent agency should also be made as one of the respondents in the present batch of cases pending before the court.

The complainants wanted a direction to the DVAC to register a First Information Report (FIR) against the Minister and then conduct a full-fledged investigation.

Their advocates told the court that if it was dissatisfied with the DVAC’s preliminary inquiry report, the best course would be to order registration of FIR and then transfer the case to an independent agency, such as the Central Bureau of Investigation (CBI).

However, the judges differed and said they may instead order another preliminary inquiry by an independent agency.

Dealing with the issue earlier, another Bench led by Justice M. Sathyanarayanan had appointed Superintendent of Police R. Ponni of the DVAC to conduct the preliminary inquiry. Accordingly, the officer conducted a detailed probe and filed a report to DVAC Director Vijay Kumar on December 18, 2019, stating that no case had been made out for registration of FIR.