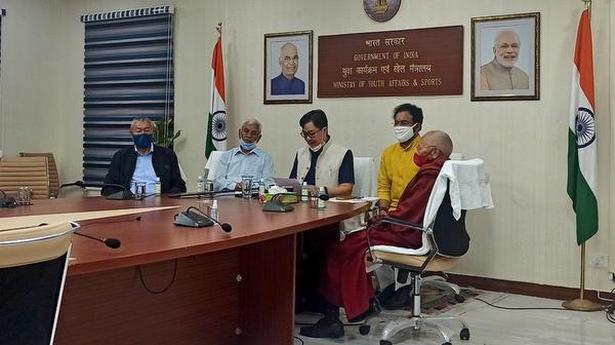 Government of India is open to discuss protection available under Sixth Schedule of the constitution to Ladakh, said Sports Minister Kiren Rijiju at a press conference on Sunday. He said, “The delegation has agreed to withdraw their demand to boycott the elections.”

The People’s Movement, a platform representing various politicians, religious and social organisations campaigning for the Sixth Schedule for Ladakh, had on Tuesday announced a boycott of the upcoming elections to the Ladakh Autonomous Hill Development Council-Leh, scheduled for October 16.

Mr. Rijiju said, “The delegation was assured that all issues related to land, jobs will be considered by the government. After 15 days of elections to Leh council, we will begin the process to consider their demand. Government of India is committed to empower Ladakh autonomous council in Leh and Kargil and would safeguard their interest.”

The Sixth Schedule protects tribal populations and provides autonomy to the communities through creation of autonomous development councils, which can frame laws on land, public health, agriculture etc. As of now 10 autonomous councils exist in Assam, Meghalaya, Tripura and Mizoram.

Former Ladakh MP Thupstan Chhewang said, “Danger lurking on China border, the call to boycott elections might hurt us on that front, keeping that in mind we have decided to not boycott the elections.”

He added, “Our men are voluntarily helping the army at China border, 97% population in Ladakh is tribal, Centre has agreed to our demand partly, the provisions under Sixth schedule allow that. There will be no domicile law on the line of J&K for us, we have been assured by the Home Minister. Our population is 3 lakh, after 10 years we will be in minority. Non-tribals might exploit us.”