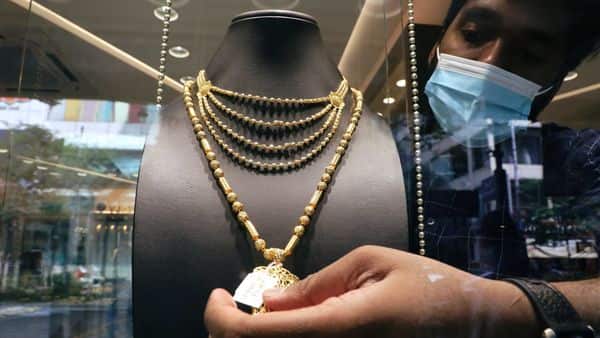 In global markets, gold prices today fell again as the dollar climbed to its highest in over a month, while investors remained doubtful over additional stimulus measures to aid the coronavirus-hit economy ahead of speeches from Federal Reserve officials this week.

The dollar, also considered as a safe-haven, notched a six-week high against a basket of other major currencies earlier in the session, dimming the appeal of bullion for other currency holders.

Focus now shifts to Federal Reserve Chair Jerome Powell’s testimony before lawmakers, addressing questions about the raft of emergency measures the central bank has taken to cushion the blow to the economy from the pandemic.

Governments are unlikely to roll out stimulus at a similar scale seen when the coronavirus first emerged, even if cases soar as they have already used much of the ammunition, Bank of China International’s Fu said.

Gold, which is often used as a safe store of value during times of political and financial uncertainty, has risen nearly 26% this year.

Stocks and other assets including gold sold off on Monday on concerns over renewed lockdown measures in Europe as well as the United States’ inability to agree on fiscal stimulus that would support millions of unemployed. Analysts say that investors also also turned to the safety of the US dollar as the opening of a U.S. Supreme Court vacancy fueled concern about the increasingly contentious American presidential election.

Further focus may also be on virus related development along with development related to US-China tensions, Brexit negotiations and US fiscal stimulus which may affect US dollar as well as general risk sentiment and thereby trend in commodities, including gold, Kotak Securities said in a note.

US Fed chairman Jerome Powell said on Monday that the US central bank remains committed to using all the tools at its disposal to help the U.S. economy recover from the blow delivered by the coronavirus pandemic. (With Agency Inputs)