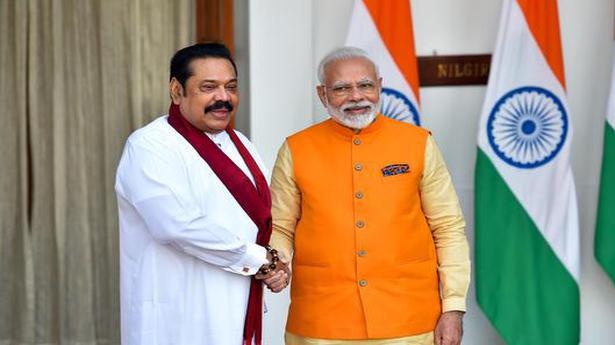 Calling on the newly elected Sri Lankan government to fully implement the 13th constitutional amendment, Prime Minister Narendra Modi “highlighted” India’s concerns about the rights of the Tamil minorities, during talks with his Sri Lankan counterpart Mahinda Rajapaksa. During the bilateral talks held on Saturday, New Delhi promised a $15-million grant for the promotion of Buddhist cultural exchanges, but demurred from a decision on Colombo’s twin requests of a deferment of its debt repayment and a currency swap.

“Prime Minister Modi called on the new government in Sri Lanka to work towards realising the expectations of Tamils for equality, justice, peace and dignity within a united Sri Lanka by achieving reconciliation nurtured by implementation of the Constitutional provisions. He emphasised that implementation of the 13th amendment to the Sri Lankan Constitution is essential for carrying forward the process of peace and reconciliation,” said Amit Narang, Joint Secretary in the Ministry of External Affairs, briefing the media about the talks.

The two leaders spoke via a videoconference, marking the first virtual summit held by PM Mahinda since he won the general elections in August, and the first such bilateral summit PM Modi has held with a neighbouring country, apart from the SAARC summit on COVID-19 that he convened in March.

A joint statement issued after the meeting also made a reference to 13A as the amendment is known. Sri Lanka’s Tamil leadership has raised concern that the existing 13th Amendment — the only legislative assurance of power devolution so far — might be under threat as the Rajapaksa government plans to embark on a new Constitution. Some within the government have called for repealing 13A.

While Mr. Rajapaksa has consistently promised India and the island’s Tamil community his commitment to 13A, as it is known, President Gotabaya Rajapaksa, who will likely enjoy greater powers according to the recently tabled 20th Amendment Bill, has emphatically said he would focus on “development rather than devolution”, and told The Hindu in an interview last year that he would not proceed on devolution “against the wishes and feeling of the majority [Sinhala] community”.

Both sides discussed cooperation on a number of infrastructure and energy projects India is keen to pursue in Trincomalee, and the Colombo East Container Terminal project, which it has bid for jointly with Japan. Officials said PM Modi hoped for “early and decisive action” on these projects that have been pending for more than three years.

India has not yet responded with a decision on the requests made personally by PM Mahinda during his visit to Delhi in February this year, for a three-year moratorium on Sri Lanka’s $960-million debt owed to India, and for a $1.1-billion currency swap arrangement, in addition to the $400-million currency swap that the RBI has already sanctioned.

“Extending financial support to Sri Lanka is one of our priorities. Both these requests are being discussed at the official level and we hope for an agreement at the technical level shortly,” Mr. Narang said, asked about the reason for the delay in the decisions.

PM Modi was accompanied by External Affairs Minister S. Jaishankar and NSA Ajit Doval, while PM Mahinda was flanked by his Foreign Minister Dinesh Gunawardena and Fisheries Minister Douglas Devananda. The presence of Mr. Devananda indicated the importance given to the issues of Sri Lankan fishermen who have accused Indian fishermen of trespassing into their waters and the use of trawlers which deplete the fish populations, and the MEA said the two leaders directed officials to discuss these issues further with a “constructive and humanitarian approach” and a view to UN Sustainable Development Goals, a joint statement issued after the meeting said.

The two sides resolved to work on a proposal from New Delhi for an “air travel bubble” to restart trade and tourism ties that have been hit by the pandemic. During the summit, India also announced a grant of $15 million for the “promotion of Buddhist ties” including the restoration of monasteries and facilitation of pilgrims to India’s newest international airport at the Buddhist site of Kushinagar, as well as expedite the construction of 10,000 housing units in the plantation areas, as promised in 2017.