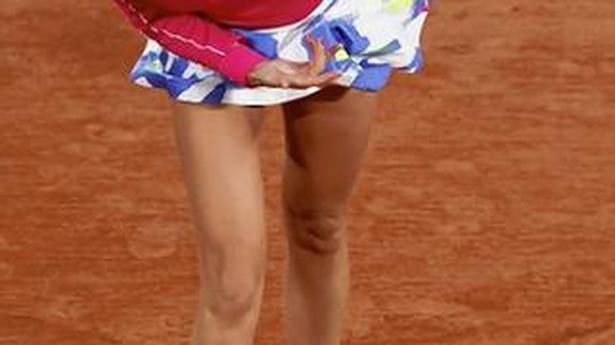 Serena Williams made a slow but successful start on Monday to her latest pursuit of a record-equalling 24th Grand Slam title at Roland Garros while US Open winner Dominic Thiem navigated a testing first-round tie against former Major champion Marin Cilic.

The American star is chasing the elusive Slam title to match Margaret Court’s all-time mark, but clay is her least favoured surface.

Stumble at the start

An error-prone beginning from Williams left World No. 102 Kristie Ahn serving for the first set before the three-time Roland Garros champion prevailed 7-6(2), 6-0.

Williams, playing here for the 18th time, dropped serve twice as Ahn moved 5-4 ahead in the opener in a rematch of their first-round encounter at Flushing Meadows.

But the sixth seed forced a tie-break that she sealed with an ace after a 74-minute slog before charging to an ultimately comfortable victory.

“She played very well in the first set, it wasn’t easy for me and she hit a lot of winners,” said Serena. “It was important for me to stay focused.”

Serena, seeded sixth here, has not gone beyond the last 16 in Paris since her defeat to Garbine Muguruza in the 2016 final.

Her last Major came at the 2017 Australian Open while pregnant.

Meanwhile Thiem, the runner-up to Rafael Nadal in Paris the past two years, defeated 2014 US Open champion Cilic 6-4, 6-3, 6-3 in their second meeting at a Major this month.

“My level was good. I was very happy with the way I played from the beginning to the end basically,” said Thiem.

Having captured his maiden Slam in New York, Thiem is trying to become the only man in the Open era to win his first two Majors at successive tournaments.

A steady display from Thiem saw the Austrian break Cilic six times under the roof of Court Philippe Chatrier on another gloomy day at Roland Garros, pushed back from its customary May-June slot due to the coronavirus pandemic.

“I’m from Austria so I know how it is to play in these cold conditions. I love it when it’s not too fast. I felt well from the first moment I came here.”

Play on Monday was initially delayed by more persistent rain.

Twice Wimbledon champion Petra Kvitova defeated Oceane Dodin 6-3, 7-5 in the only match to start on time under the new roof on Court Philippe Chatrier.

Meanwhile on Sunday, ninth seed and 2019 semifinalist Johanna Konta was knocked out by teenage sensation Coco Gauff having committed 41 unforced errors. The 16-year-old American, making her debut in the main draw, eased to a 6-3, 6-3 win.