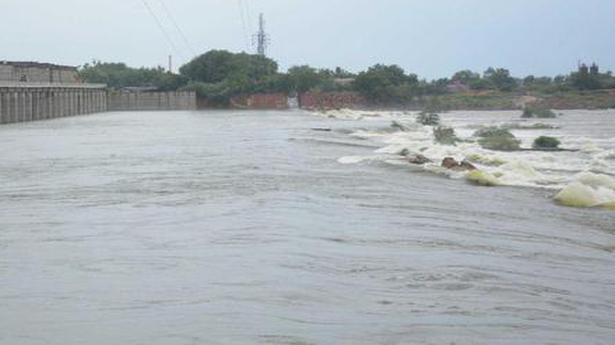 The SPSR Nellore district administration heaved a sigh of relief as the inflow into the Somasila reservoir dropped by 38,000 cusecs to about 93,000 cusecs on Monday evening.

As a precautionary measure, the irrigation authorities let out 85,384 cusecs downstream of the swollen Penna river, maintaining a flood cushion of 4.5 tmcft in the Somasila reservoir which impounded 73.44 tmcft of water.

”We are maintaining a close watch on the situation. The inflow may increase in the next couple of days as Kundu, a tributary of the Penna is still in spate,” said Somasila Superintending Engineer N. Krishna Rao.

People in several villages in Sangam mandal as also colonies in Nellore city close to the Penna river banks including Porlakatta, Jardhan Reddy Colony, Potepalem, Jonawada and Daramadugu, spent sleepless nights as the discharge was of the order of 1.48 lakh cusecs earlier in the day following an inflow of 1.31 lakh cusecs. As many as 1,500 persons were moved to relief camps organised by the officials in the city as flood waters entered their houses in the low-lying areas.

Meanwhile, the storage in the Kandleru reservoir increased to 40.90 tmcft following an inflow of 10,479 cusecs.

The discharge from the reservoir was stepped to 2,210 cusecs, including 1,500 cusecs, to meet the drinking water needs of Chennai metropolis.