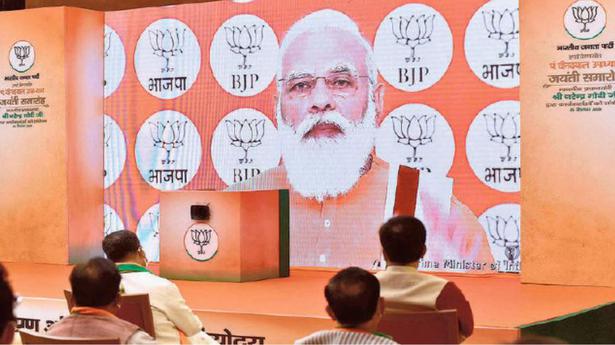 Prime Minister Narendra Modi on Friday launched a powerful defence of the three farm-related Bills and the Labour Codes dealing with long-pending reforms in the sector. He said it was the “first time in decades that the Centre has framed laws that would benefit farmers and workers”.

Mr. Modi was addressing BJP leaders and workers on the 104th birth anniversary of the party’s ideologue Deendayal Upadhyaya.

Explained: Why are the Agriculture Bills being opposed

The Farmer’s Produce Trade and Commerce (Promotion and Facilitation) Bill, 2020; the Farmers (Empowerment and Protection) Agreement of Price Assurance and Farm Services Bill, 2020; the Essential Commodities (Amendment) Bill, 2020; and the labour Bills were passed by Parliament in the monsoon session.

Mr. Modi hit out at the Opposition, which has vehemently protested the Bills, saying many governments had come to power in the States and at the Centre over the decades in the name of farmers and workers, “but what did they get—nothing; just a web of promises that neither the farmers understood nor the workers.”

He said, “The farmers were entwined in laws that prevented them from selling their produce at prices that they wanted; consequently, even though the produce went up their income did not go up. Those who always “lied” to farmers were now “shooting from their shoulders” and misleading them.

Asserting that the small and marginal farmers were the “happiest today”, he stated that it was “for the first time, they have got an alternative to bargain for the price of their produce. The tradition earlier was to sell in ‘mandis’. If he thinks he will benefit by selling there, he will sell there. If he thinks the benefit is more outside, he will sell outside.”

Mr. Modi gave a call to BJP members to fan out across villages to dispel myths spread by rivals over these Bills. “Our ground connection will bust the propaganda being spread in the virtual world,” he said.

Speaking about the Labour Codes, he said his government had brought them in to bring workers out of the complex web of dozens of laws. Over 50 crore workers employed in the organised and unorganised sectors would benefit from these reforms, with fixed income and other, including health benefits.

Will the farm bills give farmers a choice? | The Hindu Parley

So far only 30% of the workers had the coverage of minimum wage guarantee, and it would now expand to all workers in the unorganised sector, he observed.

Woman workers have been empowered and given equality by these proposed laws, as they did not get equal rights earlier, he said.

Asserting that “nation-first” is the BJP’s mantra, he noted as to how the promises made by the party have been fulfilled. He also referred to decisions such as scrapping Article 370, which gave Jammu and Kashmir special rights, and the beginning of Ram temple construction in Ayodhya.