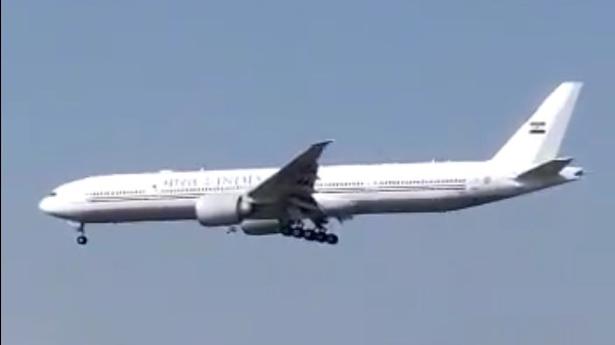 Air India One, which is the call sign of the aircraft, landed at the Delhi airport from Texas at around 3 p.m. on October 1

The country’s first-ever VVIP plane, a Boeing 777-300 ER, landed at the Indira Gandhi International Airport Thursday afternoon, after undergoing retrofitment in the U.S. for more than two years. The aircraft’s delivery was delayed by three months due to lockdown-related restrictions in the United States.

A small welcome ceremony was conducted at the airport, where Air India Chairman and Managing Director Rajiv Bansal, senior officials from the airline and representatives from the Ministry of Civil Aviation, the Directorate General of Civil Aviation and the Indian Air Force were present. A tilak was put on the body of the aircraft and sweets were distributed among the officials present, following which they were given a tour inside the aircraft. Air India’s Captain Himanshu Tiwari was the commander of the plane and flew it from the U.S. to India.

“The aircraft is now parked at the IAF’s (Indian Air Force) technical area at the airport and ready to be flown for VVIP use,” an official in the know told The Hindu on the condition of anonymity.

The aircraft is one of the two Boeing 777-300 ERs, which joined Air India’s fleet in 2018 and were sent to the Dallas Forth Worth in Texas, Boeing’s headquarters, for retrofitment worthy of India’s VVIPs, including the President, the Vice-President and the Prime Minister. The second aircraft is likely to return to India by the end of October.

Until now, the government borrowed Boeing 747s from Air India whenever there was a VVIP visit scheduled. Apart from being set aside for exclusive use by VVIPs, the planes also offer the capability of flying long haul distances without the need to make a stop for refuelling midway because of the longer range offered by 777-300 ERs as compared to the 747s.

The Ministry of Civil Aviation is in the process of moving a Cabinet note on the transfer of the ownership of the two planes from Air India to the Indian Air Force as the national carrier is likely to be sold to a private player, a government official confirmed.

The government has paid Air India ₹4,632 crore towards the cost of these planes. Air India will de-register these aircraft and hand them over to the Indian Air Force. The planes will then be entered into the IAF’s registry and get a K-series registration number given to military aircraft.

Two IAF pilots have been trained by Air India to operate the aircraft, and several others are undergoing training. They will be assisted by a pool of pilots from Air India.