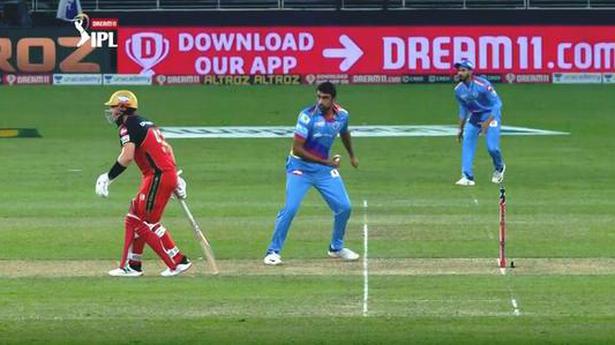 Ashwin, who famously ‘Mankaded’ England’s Jos Buttler in last year’s competition, stopped his run-up and warned Royal Challengers Bangalore opener Aaron Finch when the Australian ventured out of his crease at the non-striker’s end.

Delhi Capitals spinner R. Ashwin said he wouldn’t be giving any more warnings after he resisted resorting to a controversial ‘Mankad’ run out in the Indian Premier League under orders from coach Ricky Ponting.

Ashwin, who famously ‘Mankaded’ England’s Jos Buttler in last year’s competition, stopped his run-up and warned Royal Challengers Bangalore opener Aaron Finch when the Australian ventured out of his crease at the non-striker’s end.

Before the tournament, Ponting had said Mankading was “not within the spirit of the game” and that he would be having a “hard conversation” with Ashwin on the subject. The Australian legend was smiling after Ashwin refrained from removing Finch.

“Let’s make it clear !! First and final warning for 2020. I am making it official and don’t blame me later on. @RickyPonting #runout #nonstriker @AaronFinch5 and I are good buddies btw #IPL2020,” Ashwin tweeted after Monday’s game.

Ashwin, who said he was “good buddies” with Finch, has proposed giving a “free ball” to the bowler and docking the batting team five runs when a batsman is caught out by Mankad.